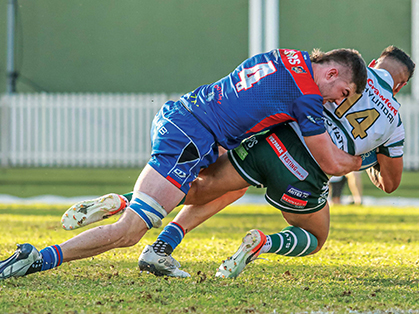 The two Peninsula powerhouses of Shute Shield rugby had seasons to forget in 2020, but reports out of the Warringah and Manly camps is that ‘the fire is back’.

Warringah fans have become accustomed to blocking out September as a no-go zone for holidays.

That time of the year is reserved for finals football.

The Rats won their first title in 2017 and featured in two losing grand finals during a golden five-year run.

So, there was a strange feeling down Warriewood way when the home and away season finished last year and the Rats were nowhere to be seen.

An eighth-placed finish would be a pass mark at some Shute Shield clubs, but not Warringah.

It didn't sit well with coach Michael Ruthven, his players or the Rats' loyal band of supporters.

"As always at Warringah, there is expectation both externally and internally," Ruthven declares.

"Our strong community of supporters have become accustomed to success over the past five years and we certainly fell short last year.

"There will be an expectation that we bounce back strongly and produce a good brand of rugby, which will ultimately translate into positive results.

"Internally the fire is burning super bright within the players and coaches."

The planned revival will be a lot smoother given the bulk of last year's squad is back, bar the retired Sam Ward and Josh Holmes, and American-bound duo Mungo Mason and Maclean Jones.

The Rats have picked up three Penrith players - Dean Blore, Johnny Tuivati and David Tifa – along with Gordon twins Hugh and Angus Margin.

Ruthven, who has added Sea Eagles legend Geoff Toovey to his coaching staff, likes what he sees at pre-season training.

"Retention was a key for us and we are super excited to have another really strong group to work with, along with some strong recruits," he says.

"Max Girdler had a tough 2020 with an injury that kept him sidelined for all but 30 minutes of the season and he is really eager to have a positive influence on the group.

"Ben Marr had an outstanding season last year. He is so naturally gifted and continues to show a level of maturity with his footy.

"Of the new guys, Johnny Tuivati has a great skillset for a forward and Dean Blore is a highly talented individual out of the Penrith Panthers rugby league system.

Including - if Ruthven has his way - a return to September footy.

"You can expect to see a highly talented group, working hard to play a positive brand of rugby, competing for everything and accepting nothing less than a win," he promises.

Warringah starts its 2021 Shute Shield campaign against Randwick at Rat Park on April 17.

Manly coach Matt McGoldrick sometimes finds himself wanting to look away at training but unable to as his team rips into each other in the most physical of contact sessions.

The Marlins boss identified size and physicality – or a lack thereof - as one of the key reasons his side never really threatened to mount a serious charge for the finals last year.

Size matters in rugby and Manly has bulked up considerably.

New forwards George Noa, Tevin Ferris and Mana Koko are big and a real handful, while former Canberra Raider Komiti Tuilangi is a centre/winger who combines speed, pace and power.

"We set the players loose for 20 minutes each Tuesday for full-on contact work and the intensity is incredible," McGoldrick enthuses.

"There are no gentlemen's agreements. If some other guy's out there looking to take your spot, you are going to rip in.

"One game against Eastwood last year we gave up something like 80 to 100 kegs to their pack – that won't be the case this year.

"We've got a bit more ball carry in us, more size in the pack and more grunt."

Defensively the Marlins were rated the fifth best side in the Shute Shield last year.

But in attack they were ninth.

"We needed some bigger blokes who can break tackles. The blokes who have come in have body shapes we didn't have," McGoldrick explains.

"We've grabbed some guys that give us a real point of difference, including a very good half (Dion Spice from West Harbour)."

The majority of last year's team has returned, with the younger members sure to benefit from what was a fast-tracked education to the rigours of Shute Shield.

Yool Yool, Hunter Ward and James Parker were among a raft of debutants to shine as McGoldrick blooded a dozen local juniors.

Two-metre tall lock Max Douglas continued to make large strides – literally and figuratively – and prop Sio Tatola is coming off the bench for the NSW Waratahs.

"Last year allowed us to blood a lot of younger guys, which has meant we have greater depth and essentially more first-graders," McGoldrick says.

"We have a great group of experienced players and hungry, younger guys. We showed a lot of character at times in 2020 and I expect us to continue to do that in 2021."

As for an immediate return to finals football, McGoldrick declares: "It didn't sit well with anyone that we didn't make it last year, but I can see the fire is back in their eyes."

Empower young women
Assist local girls and young women to become confident, self-respecting, and responsible...
Battle for Military Road rages on
The Neutral Bay community and North Sydney Council are at loggerheads over a planning study...
Castle on the hill
Delmar’s new multi-million-dollar wing in Dee Why has opened to Northern Beaches patients.
Flood fix flagged
The regular closure of Wakehurst Parkway may soon be a problem of the past, with Northern...
‘Gender bias in the extreme’
Plans to upgrade Willoughby Leisure Centre have been condemned by the Northern Suburbs...