The hunters and the hunted 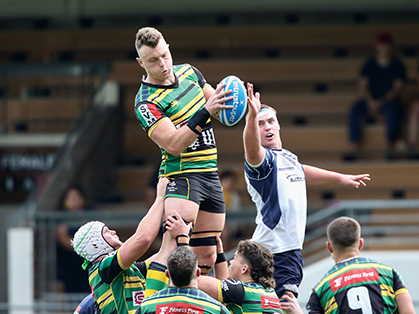 Gordon ended its drought with premiership glory last season, and Norths went close again. So, you can bet expectations are high heading into the 2021 Shute Shield!

The cleaners had barely started mopping up after the biggest party Gordon's seen in 22 years before Brian Melrose was plotting the next chapter.

The Highlanders' head coach, who has taken over from premiership-winning messiah Darren Coleman, wants a line put under the club's emotional and drought-breaking grand final win over Eastwood in October.

Melrose knows all too well that winning the Shute Shield title for the first time since 1998 has only ratcheted up expectation and pressure heading into a new campaign.

"It was a great season with a great ending and anyone who was involved will remember it for the rest of their lives," he tells North Shore Living.

"But it doesn't guarantee you anything into the future.

"We are the premiers and enjoyed that ride but we're now just one of 13 teams.

"We need to start again and see if we can get back in the race."

Success has come at a price.

Not only has Coleman gone – taking up a head coaching role in America's Major League Rugby competition – but so too has a host of grand final-winning players, including Catchpole Medal winner Mahe Vailanu.

Wallabies and Waratahs forward Jack Dempsey is also another to depart Chatswood Oval, taking up an offer with Scottish outfit Glasgow Warriors.

"For good reasons many people have moved on to professional rugby and that can only be a good thing," Melrose says.

"In their place we've got a lot of young guys who you would think want to achieve more and you'd like to think they are on the way up, not the way down.

"We've got to find different players to find a different experience but hopefully one that is just as good as last year.

"I've seen this movie before. I love rebuilding teams. It's stimulating."

Melrose acknowledges Gordon's famous tartan jersey will have a big target on it in 2021.

The hunter has well and truly become the hunted.

"Us winning last year probably gave a lot of clubs belief that they could do it as well," Melrose points out.

"Everyone wants to measure themselves against the premiers and we’ve got to be prepared and ready for that.

"Unless we can find a way to get another 10 per cent from each player, the chasers might get you."

Gordon starts its premiership defence against Manly at Manly Oval on April 10.

Northern Suburbs had plenty of valid reasons to take the easy option and fall into Shute Shield obscurity last year.

A coach stranded in New Zealand due to COVID restrictions, no home ground and injuries and rep absentees could all have been thrown up as legitimate excuses to drop standards.

Instead, the Shoremen went the other way, digging deep and laughing in the face of adversity.

Norths finished one game short of the grand final, going down in an epic 100-minute semi-final slugfest to Eastwood.

What doesn't kill you only makes you stronger.

"The adversity is probably not something we talked about or harped on too much… we kind of just got on with the job, which I am proud of the boys for embracing," skipper Harry Burey tells North Shore Living.

"However, at the end of the day we put ourselves in a position to win the semi-final and we just didn’t get it right.

"So, while I'm proud of the effort through the year, it was still a disappointing finish."

Head coach Earl Va'a, who managed the team via Zoom from NZ for large slabs of last season, has decided to stay across the ditch, handing the reins to his assistant Zak Beer.

The club will return home to North Sydney Oval for the first time since 2019 after it was deemed off limits last year due to the drop-in cricket pitch remaining in place all winter.

And there are a number of new faces, including West Harbour pair James Turner and DP de Lange, Kiwi front-rower Tyler Kearns and Welsh 7s half Jacob Flynn.

Beer isn’t planning to blow up what he and Va'a created.

"The fact that Earl and I worked so closely together last season and in preparing for 2021 meant that the cohesion and continuity is maintained from a program and culture perspective," the coach says.

"We are an aspirational club who want to be pushing for success right through our grades and colts every season - but we need to be better in a lot of areas than we were last year."

Asked what would be an acceptable outcome in season 2021, he shot back: "A premiership."

"That's easier said than done but anything less will be disappointing."

Norths begin their premiership campaign against Penrith at Nepean Rugby Park on April 10.