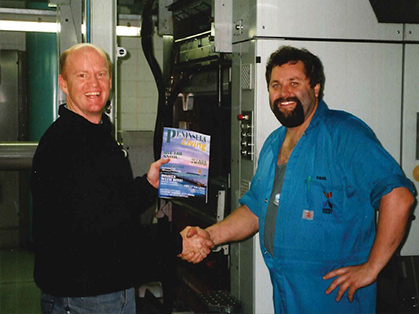 Steve, congratulations on the anniversary! Firstly, can you talk me through the formation of Active Networks…

It’s fair to say the business was born out of a bit of a midlife crisis. I used to work for BHP and I grew tired of working within a big bureaucratic business and being just a small cog in the wheel.

As part of the midlife crisis, I headed overseas with [my wife] Mary for about 10 months, and we travelled with a couple in South America. We decided to swap business ideas. So, I came back and started their business idea up, and they went back to America and started up mine.

Their business idea was a sports and rec club, which needed a medium to bring everybody together and that was a little magazine I created called Active Sports.

So, with Active Sports the idea was to distribute it to all the different sporting clubs around the Northern Beaches. It was going to be the start of my sports and social club that was going to take over the world [laughs]. I did for nine months, and it didn’t set the world on fire, in fact we made no money out of it. But Peninsula Living evolved out of that, because we got to a point where it was either shut down or change the magazine.

How difficult were those early days?

In that first week, I literally worked from 7 in the morning till 3am 10 days straight. I slept on the floor of the office, which used to be a brothel, and it was just me and the graphic designer – who was actually a landscape gardener having a midlife crisis too.

I’d get all the content emailed to me, and I’d try and massage it into something readable but I didn’t really care and I’d put it on a little floppy disc for him. He’d never built a magazine in his life but he had bad knees and wanted to get off the tools.

I was going between the office and the hospital, as Mary had just given birth to Connor who was 11 pounds 10 [laughs]. Nurses would say, ‘We’re not going to worry about the bottle we’re just going to start him on hamburgers’.

Anyway, after missing the third consecutive deadline, I was literally curled up on the carpet in the fetal position and I called Mary to tell her I couldn’t do this anymore, I was going to shut up shop. I’m blubbering away and there’s complete silence, and I’m waiting for this sympathetic voice to come on the other end and say, ‘That’s OK…’ Instead I got, ‘Get off your fucking arse and make it happen’. It was the best thing she could’ve said.

The first two years it was essentially done month to month. Every month there was the potential we’d have to shut down. I didn’t take a wage for 18 months, and I would fly to Tasmania every month to sit on the presses for quality control.

For all the content in that first magazine it cost just $600 – editing, proof-reading the lot. Today, you’d have to do the maths but it’s a significant cost. But that’s important because we quickly realised that if you just keep producing crap you will eventually die, if you produce a quality product that is relevant, you are much more likely to stand the test of time.

So, you weren’t concerned about dire forecasts for print media?

Print has been under the hammer probably for the past decade – we’ve seen newspapers have massive reductions in revenue year in, year out.

We didn’t really get impacted for a long, long time by the revenue reductions with print – and I put that down to the fact that we have a great product, we have a great team, and our unique point of difference is that people’s money is working for them for longer than just a day.

Our whole business is built on delivering value to our clients with integrity and honesty, and that sounds like a big wank but it’s actually what we do. And if we do it well, we secure long-term clients, which is what we’ve managed to do. Forty-five per cent of our clients have been with us for over five years, and 25 per cent for more than 10. In fact, we’ve got a handful of clients that have been with us for 20.

So how have you safeguarded against potential print revenue declines?

We kind of remained aloof to the reduction in print for probably the first five or six years but we could see that that was going to affect us at some point in time.

So, in order to make sure we had a sustainable business, we had to go down the path of evolving into other products and services and that’s why we have pushed our digital assets.

As a result, our clients and readers now have Think Local, Buy, Sell, Swap and Connect, our Facebook sites and the EDM, all these channels with which they can connect with their community.

We also build websites, do SEO, manage people’s SEM, AdWords and Facebook campaigns. So, we really have taken the steps towards becoming a marketing company that publishes as opposed to a publisher that dabbles in a bit of marketing.

You mentioned your deals and promotions site Think Local, where did that concept come from?

That was really spurred on from an article I read in the Financial Review about what was going on in the States – they were launching those kinds of things like Groupon and Living Social.

So, I pulled that out, cut out the article, and a year later I decided that was something we needed to drive and push. It has given us another means to help businesses advertise.

How did COVID affect the company?

We had a good start to 2020 and we were set to have a record sales month in March. Then, I think it was 15 March when everyone fell off a cliff and we never sold another ad. We shut the business with the intent to come back but in all honesty if you asked Mary and I whether we thought we would, it was a flip of the coin. I even told a mate that I was resigned to the fact we probably wouldn’t be back. Then JobKeeper and other things happened and we survived.

Last thoughts on your company turning 20?

At the end of the day, you can only get there with great staff and great clients, and from our perspective 20 years is really about acknowledging our clients. I can probably pick out a dozen clients who have been with me for between 15 and 20 years. Collaroy Kitchens for instance has been with me since the first ever issue.

And I couldn’t be prouder of how far we’ve come, and the reputation we have built within the local community.