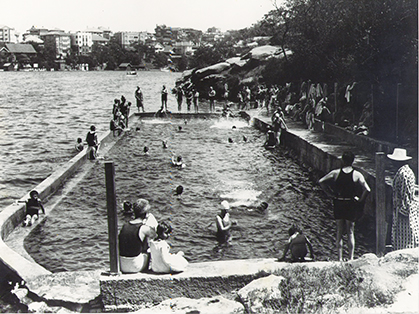 With the summer holidays finally here, many of us will be heading for the beach (socially distanced, of course).

Most likely wearing board shorts, Speedos, bikinis and thongs: national wardrobe staples. But for the first Harbour people and the early European settlers, the only bathing suit was the birthday suit.

The fact that the NSW government prohibited daylight bathing in 1833, shows that more than a few gentlemen must have succumbed to the temptation to shed their heavy, impractical clothes – not to mention their moral standards - to cool off in the water.

Public bathing was popular on the North Shore by 1865, when the tidal beach at Lavender Bay was set aside for recreation. An 1880 sketch of the Lavender Bay Baths in Stanton Library’s collection shows women wearing long, voluminous dresses. The perceived danger to their reputation clearly held more sway than the very real danger of drowning.

Daylight bathing was eventually legalised in 1903, but regulations requiring modest dress for both men and women soon imposed. Stanton Library has an example of acceptable 1910s attire. The knitted woolen tunic top, worn over matching drawstring bloomers, covers the body from neck to knee and is dark-coloured for decency. Wool fitted the body closely while dry but tended to either shrink or sag when wet.

During the 1920s, women’s increasing social freedom was reflected in more revealing swimwear. A 1929 photograph in Stanton’s collection of MacCallum Pool at Cremorne Point shows men and women bathing together, wearing one-piece suits with shorter legs, lower necklines and vest-style sleeves. Kimonos or robes were often worn out of the water for modesty.

The swimwear market boomed in the 1920s and 30s thanks to the acceptance of swimming as a sport and the fashion for sunbathing. In 1928, Sydney’s MacRae Knitting Mills produced a one-piece knitted cotton swimsuit, with a ‘racer-back’ designed for competitive swimming, under the name ‘Speedo’ – the original ‘Aussie cossie’. Both male and female competitors wore this style at the 1938 Empire Games at North Sydney Olympic Pool.

Speedo produced a nylon swimsuit for the 1956 Melbourne Olympics, instead of heavy wool or cotton, giving the Australian team a clear advantage. Speedo’s iconic racing briefs went on sale in the early 1960s, setting the international standard for competitive swimming.

On the beach, ‘brief’ was certainly the trend for women; the scandalous European bikini, first introduced to modest Australian society in the early 1950s, became commonplace. While women wore less, men began wearing more. By the mid-1950s, Hawaiian printed board shorts were a popular and practical choice for men, with the arrival of lightweight ‘Malibu’ surfboards. The die was cast in the 1950s; bikinis and board shorts are still the most common beachwear today.

Save the Orangutans
Be an environmental crusader and volunteer to raise funds and awareness for the...
Help Regenerate Our Bushland
Eager to get outdoors this summer and give back to your community at the same time?...
Assist Native Wildlife
Support the incredible work local service Sydney Wildlife do to rescue and rehabilitate...
Befriend a Veteran
CCNB is looking for kind, friendly locals to provide social support to war veterans in the...
Top 5 interstate holiday spots
Australia’s state borders are reopening, and now is the time to do your part in boosting...