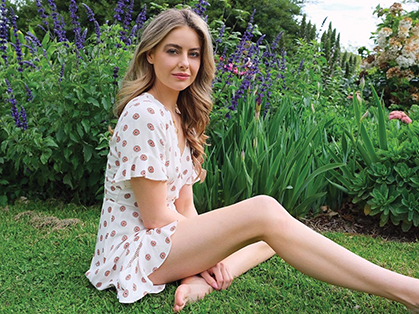 While catching up with her family in Sydney during a short break in filming on Neighbours, April Rose Pengilly stopped by the North Shore Living offices for a wide-ranging chat with editor Joe McDonough.

APRIL Rose Pengilly has modelled across the globe; appeared on Dancing with the Stars; and is currently a fan favourite on Ramsay Street, where she has played the Neighbours character of ‘Chloe Brennan’ for the past three years. Her star is certainly on the rise.

April, I understand you have a strong connection to the North Shore?

Absolutely! My parents separated when I was three, so I grew up with mum (fashion designer Karen Hutchinson) on the North Shore and went to Cammeray Public for Kindy before moving to Wenona for the rest of my schooling. We had dogs, I did ballet in Cammeray and always loved the area… Still do!

What was it like being the daughter of INXS legend Kirk Pengilly?

For me growing up it was just like dad’s job. It meant he travelled a lot being on tour, so I missed him a lot when he was away. But yeah, I’m very, very proud of him. Obviously, they’re not playing much anymore, and I did wonder if he missed it, but he was just saying the other day that he really doesn’t feel like he left any stone unturned.

You began modelling while still a student at Wenona?

I signed to an agency when I was in Year 11 and modelled for years, living and travelling all over the world. I had only just turned 18 the first time I went to Japan and working over there is quite strange and can be very isolating. To give you a snapshot, agencies would bring in models from all over the world and they’d put us in a van and drive us around all day from 9am to 10pm just going to casting after casting. There, you stand in front of a panel who speak to your manager in Japanese and you don’t know what they’re saying, and they’re like, ‘Turn for us’, and you do as your told like a little robot model [laughs]. I also fortunate enough to work in cities like New York and Paris… They were all incredible experiences in different ways.

Why did you move to acting?

I always wanted to act. I studied drama, and performed in musicals and plays in high school, so it was always something I enjoyed doing. I gravitated more towards modelling at first, but the desire was always there. So, I did lots of short courses and private coaching, and films with friends, anything I could do to get my experience up. And then I was lucky enough to get roles on Australian mini-series’ Brock and Peter Allen: Not the Boy Next Door. Then, of course, my big break with Neighbours.

I believe you were moving to Los Angeles when Neighbours came calling?

[Nods] I was working out where I was going to stay. I had my US visa, which took about two years to get, and I was just a few weeks from flying out.

Prior to that, I had done a general audition for Neighbours with an old script – not for any character specifically. I didn’t think much of it at the time because I had auditioned for Neighbours a few times before and Home and Away as well.

I’d basically packed my bags for LA when my agent called and was like, ‘OK, it’s down to you and one other girl for the role, you have to fly down to Melbourne in a few days for the final audition’. And I was like, ‘What role, what are you talking about?’ So, it all snowballed really quickly.

They offered me the role after the audition, but I didn’t really know what I was accepting because I’d only seen the two scenes I had to perform. So, then they sent through the character synopsis for ‘Chloe’ and the character was very similar to me in a lot of ways – a little bit more of a wild child, I’m a bit of a nerd – but I was like, ‘OK, this one is me. I get it.’

Was it overwhelming initially?

Oh totally! The show is such a juggernaut and it’s been going for so long, there is a lot of pressure. Even now I get a bit nervous when I have a scene with ‘Toady’, or ‘Karl’, or ‘Susan’ – you know they’ve been there so long, they’re just icons. Eddie Redmayne after winning his Oscar gave a shout out to Jackie and Alan (Susan and Karl), and I heard someone say recently that even Prince Charles said he watches it – don’t know if that’s true [laughs].

Who would you love to work with in the future?

I love Jennifer Lawrence but I’m going to say Jim Carrey – because I love comedy and I grew up watching his films and doing impressions of him for people. So, that would be a bit of a dream come true!

Is there a film franchise you’d love to be a part of?

I love the Marvel films. I am such a fan that during lockdown I went through and watched all of them again in the proper order. I really love Thor: Ragnarok, the one they shot here… I would love to work with [director] Taika Waititi. I actually auditioned for that, now that I think about it, for a little guest role, so maybe I’ll get another chance.

What is April Rose like away from the cameras?

I’ve been described as quirky and goofy, and I’m known with Neighbours fans for sneaking in Simpsons and Seinfeld quotes and references where I can. A lot of what you see on the show is actually me, just less wild, I’m more of a homebody. I am also very active, and I have a Chihuahua named ‘Pixie’ that I absolutely adore and love taking for long walks.

Empower young women
Assist local girls and young women to become confident, self-respecting, and responsible...
Manly in mourning
The Northern Beaches community is reeling after the recent passing of rugby league...
School development sparks concern
Mosman Council has raised concerns over the bulk and scale of the proposed redevelopment of...
The crime report: North Shore
Get the lowdown on the recent incidents reported near you...
Growing pains
Plans to redevelop land within Royal North Shore Hospital have been met with concern by a...