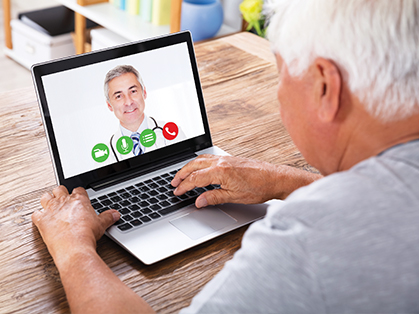 Back in March, at the height of the COVID-19 pandemic, the Heart Foundation revealed general practitioner (GP) visits nationally dropped by 10 per cent.

This meant in one month alone, there were 96,000 fewer visits compared to the same time last year.

Locally, Dr Imran Khan, director of Warringah Medical Centre, says his practice is still catching up from a drop in patients, scared off during the first wave of the outbreak.

“This has been a big concern, certainly, with regards to chronic disease management and cancer screening.

“If a patient isn’t coming in, we’re not going to pick those ‘red flags’ up and potentially delay a diagnosis.”

He says the trend has been particularly troubling for patients with cancers such as pancreatic, or certain forms of breast or rectal cancer, which have fast doubling times.

“It’s made a big difference. New referrals from GPs are still picking up now. We’ve had to pick up again with twice as much [workload],” he says.

“I’ve had several patients who could have presented three or four months earlier, but they chose not to because of COVID.

“While this is completely understandable, it did result in a delay in the diagnosis, the result of which was much bigger problems.”

While physical visits to practices may have fallen during the peak of the pandemic, GPs and physicians nationwide have heralded the continuation of telehealth rebates as key to ensuring diagnosis rates and chronic disease management does not drop further.

In mid-September, the Australian Government announced the Medicare subsidised telehealth scheme, which allows patients to consult with their doctor via telephone or video call, has been extended until March 2021, as the COVID-19 outbreak continues.

Federal Government figures have revealed in the three months between March and June, there were 16 million phone and 1.4 million video consultations with GPs, specialists, and allied health professionals nationally.

Locally, Dr Khan says the services have been widely adopted by the medical centre’s patients to address a range of issues, from small rashes up to significant long-term illness management.

“It’s [the extension] fantastic news, as it provides patients who may be less mobile, such as the elderly, and vulnerable groups, like patients with chronic diseases, with access to their regular doctor. I think it sets the future of medicine,” says Dr Khan.

Reaching out to the community, Peninsula Living was overwhelmed with submissions from locals enthusiastically supportive of the scheme, stating virtual or phone consultations offer ‘flexibility’, ‘reduce exposure to illnesses in waiting rooms’ and ‘save time’.

Professor Izard says the services may be particularly beneficial for those in aged care seeking diagnoses or cancer treatment while remaining isolated.

He explains that phone and video consultations also provide an opportunity for existing patients, currently limited in bringing support systems to the consulting rooms during the pandemic.

“These consults really end up being very much for the patient’s benefit,” he says.

“Think about the effort and cost involved in transporting someone from Palm Beach to Frenchs Forest or St Leonards. Being able to do it via distance and having a reasonable Medicare rebate makes a big, big difference.”

Flying under the radar

Dr Khan says he remains concerned for elderly patients, however, as many put off attending visits while also avoiding telehealth consultations due to technology concerns.

“I really want to emphasise that you don’t need anything fancy, just a normal telephone,” he explains.

“We can detect a lot of things just by talking to our patients, so I want to encourage them to really not be afraid.”

He says there is no need for older patients to be wary of remote consultations, as any potential issue will be addressed by a doctor in a scheduled face-to-face follow-up appointment.

“If I do find, or if the patient mentions, any ‘red flag’ symptoms, we arrange to see them in person.

“It means those that are concerned about being in a busy waiting room at the moment can avoid that, as we can negotiate a time that works for both us and the patient.”

Professor Izard says this avoidance issue is particularly relevant to cancer patients, the majority of whom are over 60 years of age.

“It’s understandable that the over 60s are most fearful of COVID currently because of what’s known about it, but it means they cannot put off calling the doctor because they’re anxious,” he asserts.

“If you’ve got a symptom or a problem, it’s very important not to put it off because that can have big implications down the track.”

Fresh Spring Doona Cleaning for Only $25