A farmhouse and a famous kangaroo 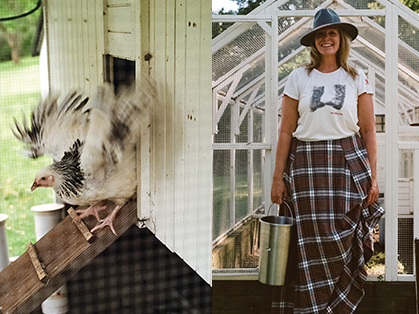 It’s a story that traverses Indigenous custodianship and European colonisation, Italian migration and the life and times of one very famous kangaroo.

When speaking of the history of Terrey Hills and Duffys Forest, local Danni Murray paints a vivid picture of a community embedded in broader Australia.

“I just feel like this area has a very special soul,” she says.

“I really don’t think there is anywhere else in this city that has the same heart.”

It is this unique spirit that steered Danni down the path to writing her soon-to-be-published coffee table book, A Farmhouse and a Famous Kangaroo.

“I’ve been an interior designer for 20 years, so when I started writing the book 18 months ago it was to be primarily a showcase of home,” she explains.

“But as COVID hit, I was given this beautiful amount of time to delve further and further into the area and the people and the architecture and the history.

“What happened was it evolved into this kind of historical account of Terrey Hills and Duffys Forest on many levels.”

The result is a book that weaves together her own experiences of semi-rural, sustainable living with the rich history that continues to influence these suburbs today.

She tells of the Ku-Ring-Gai peoples that originally inhabited the land and their engravings that can still be seen today; the European settlers and their profitable logging trade; and the Italian migrant community who brought their knack for vegetable growing to the area.

From the building of the first schools and roads, to the origins of the local riding and gun clubs and story of Waratah Park and its most famous inhabitant, Skippy the Bush Kangaroo.

She even relays the tale of the debaucherous parties thrown by the Eastern Suburbs crowd in the 1900s on their regular trips to the ‘country’.

“I never really sat down and said, ‘Right, I want to write this book about Terrey Hills and Duffys Forest’,” Danni says.

“But the community spirit around it [the book] and excitement about wanting to leave a legacy about this area was so strong, that it was almost like I was vicariously writing this book for everybody else in this community.”

Each chapter of the book spans Indigenous inhabitancy through to her life in Duffys today, with interviews from locals such as former fire commissioners Greg Mullens and Shane Fitzsimmons and Philippa Smith, long-time wife of Aussie icon Dick Smith.

“There’s been amazing, amazing stories, but the absolute standout for me was being introduced to the last remaining living descent of the actual Hill family, after whom Terrey Hills is named,” Danni tells Peninsula Living.

“I got to hear all about her childhood and her family during the early 1900s, when she was picking wildflowers and taking them up to the carts for her Dad to take them into the city. Their original flower market was located next door to the current Hills The Flower Market.”

With Danni in final talks with an international publisher about the book, she says she hopes to share the unique story of her quiet backwater with the world soon.

“I feel really, really thankful, because I’ve learnt so much and I’ve met so many wonderful people, but I’ve also got this huge, new appreciation for the people that live in this area and the area that I live in because of it.”

Volunteering across Pittwater
Eager to give back to your community? Check out these great opportunities to volunteer in...
Top 5 Northern Beaches Christmas activities
In the spirit of the season, we’re gifting you our top five festive picks for COVID-safe...
Northern Beaches commuters thrown under the bus
Significant changes to the Northern Beaches bus network will be ushered in by the State...
Keeping kids calm on the rough seas of life
Witnessing firsthand the anxiety many children have experienced this year, Clare Flory was...
The Northern Beaches' unsung heroes
As the saying goes, ‘When the going gets tough, the tough get going’, and Peninsula...