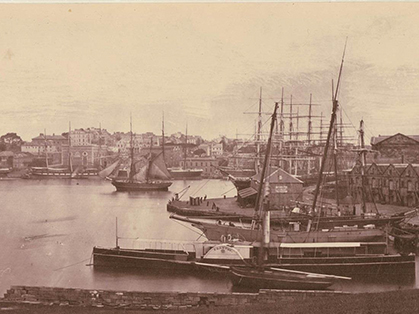 The future of the traditional large Manly ferries is once again under a cloud as Transport NSW proposes replacing them with inner harbour Emerald class ferries – as reported in the November issue of Peninsula Living.

A ferry service to Manly commenced as far back as 1830, with Barney Kearns operating an on-demand transfer, by sailing boat, between Balmoral and Manly.

However, the type of operation that we know today, with ferries running between Circular Quay and Manly at scheduled times and for posted fares, began in earnest in 1853, when Henry Gilbert Smith built the Pier Hotel and a ferry wharf. His purpose was to encourage land purchasers and day-trippers to his newly laid out village of Brighton. As well as building the fixed infrastructure, he chartered The Brothers – a wooden paddle steamer of 23 tonnes – to run a reliable service.

Both the village and the ferry service prospered and by the late 1850s about half a dozen vessels operated on the route.

In 1865, the Brighton and Manly Steam Ferry Company was formed. It operated a service with a purpose-built steel paddle steamer of 63 tonnes, the Phantom. This was a double-ended vessel and its funnel was painted white, with a black top. Both the colour scheme and the double ended design were to become synonymous with the Manly ferries.

The service ran for 110 years but by 1974 the then-owner, Brambles, had largely lost interest. The NSW government took over and announced that they would operate only two large ferries, replacing the others by slightly modified inner harbour ferries. One of these, the Lady Wakehurst came onto the run.

But following a massive community protest and operational problems the Government relented and in 1976 announced they were going to build three large new ferries – the Freshwater class that operate the route today.

Assist Native Wildlife
Support the incredible work local service Sydney Wildlife do to rescue and rehabilitate...
Befriend a Veteran
CCNB is looking for kind, friendly locals to provide social support to war veterans in the...
The Aussie cossie
For the first Harbour people and the early European settlers, the only bathing suit was the...
Volunteering across the Northern Beaches
Eager to give back to your community? Check out these great opportunities to volunteer in...
Questioning the status quo
Irene Falcone created the $20 million empire Nourished Life with $100 to her name and now...