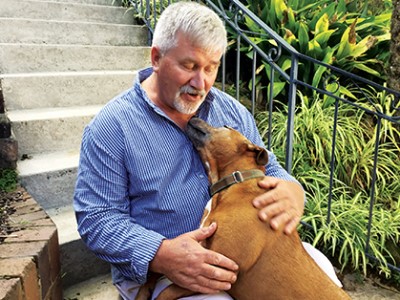 If it was up to Martin Pryor, his Parkinson’s diagnosis five years ago would barely rate a mention in this feature. After all, when people ask what it’s like having the disease, he defiantly says, ‘I don’t have it, I live with it’.

But there’s no denying it has changed the Balgowlah local’s life, and not just for the worse.

Sure, Martin says matter-of-factly that it is “robbing him of time”, and talks about his right-hand shaking, as well as the regular ‘freezing’ episodes he suffers, where his feet feel glued to the ground.

But the silver-lining, which he is always quick to return to throughout our captivating chat, is that it jolted him into action.

Instead of wallowing in self-pity, he has written and produced three music albums, helped set-up a men’s choir, fundraised for Parkinson’s research, and most recently, self-published his first children’s book.

Indeed, Bungee – A Doggy Tale (The Adventures of Bungee the Rescue Dog) is the catalyst for our coffee sit-down.

We find out that Bungee was inspired by the Staffy-Kelpie cross owned by Martin’s son Lachlan.

“I was just sitting on our deck one day and the dog was mucking around on the back lawn playing with Lachie, and I thought, ‘I wonder what Bungee thinks about that great big hairy guy?’ Martin grins.

“Then it just came to me: ‘Bungee slowly opened his eyes and found that to his surprise he was staring into the deep blue eyes of a great big hairy bearded guy’.”

What started as poem evolved into a book for kids aged 3-8.

He tested it with the young children in his cul-de-sac, and they adored Bungee, even more so once they were told he was real.

Martin even included an email address for the pooch, and one little girl wrote: ‘Dear Bungee, if I send you a can of dog food, will you send me a signed photo?’

The response has been overwhelming Martin says, and it has motivated him to write seven other books for the Bungee series.

Having retired from teaching at SCEGGS Redlands after his diagnosis, Martin was concerned about the cost of self-publishing, but his wife and Andrea – who still teaches at Pymble Ladies College – reassured him.

“She said, ‘Stop worrying about whether you sell the books or not. It’s not about the money. I’m really proud of what you’ve done, it’s amazing’. I said, ‘What have you done with the real Andrea,” he laughs.

Of course, as mentioned, this is just his latest achievement.

Go all the way back to the late 80s, and the Tasmanian born sailor took the concept of England’s acclaimed Three Peaks Yacht Race – which he had competed in several times – and brought it to Launceston.

After five years of running the event from Sydney, he took a step back in 1993 and actually won the race for the first time that same year. His son Lachie would go on to win the second last race ever held with none other than around-the-world sailor Jessica Watson.

“We proudly claim to be the only father and son team to win the event on different boats,” Martin smiles.

Martin was actually the driving force behind the introduction of sailing to the SCEGGS sport program in 1999.

Fast forward back to the moment in 2016 when his neurologist said, ‘Please take a seat Martin… I’m 100 per cent sure you have Parkinson’s’.

“I actually said, ‘Thank God for that’,” he reflects. “Because in the week leading up to it, I had a lot of deep and meaningfuls with Andrea about what we’d do if it’s cancer or something worse.”

One of his first actions after hearing the news was to get rid of stuff he wouldn’t need anymore, like his guitar. Having not played for 35 years, he picked it up and started playing the twelve-bar blues. The phrase ‘Parkinson’s Blues’ came into his head and instead of throwing out the guitar he wrote his first album.

He has since handed out his ‘Hot Sand’ album to friends and family and told them to donate to Parkinson’s research rather than buy them off him.

Martin also gives much of his time to Voice Male – a men’s choir in Mosman that he co-founded. It is now in its fourth year and the men have performed at Sing Out Sydney among other concerts.

If all that is not enough, he has big plans to complete the ‘Sydney to Hobart’ with a crew of three able-bodied sailors, as well as Parkinson’s sufferers – and the words ‘Support Parkinson’s research’ will proudly be printed on the spinnaker.

Oh, and he and sons Lachie and Rory have every intention of mountain biking across the Simpson Desert next year – something Martin has already accomplished many times before.

“I need to drip feed all these plans to Andrea,” he laughs.

Anyway, make sure you get your hands on a copy of Bungee – A Doggy Tale which is available from Amazon Australia and Barnes and Noble, or email martinpryor54@gmail.com.

Empower young women
Assist local girls and young women to become confident, self-respecting, and responsible...
The crime report: Northern Beaches
Get the lowdown on the recent incidents reported near you...
Chatswood reaches new limits
Chatswood will see another skyscraper in its midst, after Willoughby City Council endorsed...
The North Shore's snug saloons
With the chill returning to the air, North Shore Living saw it as a public service to...
Ferry furore
Councillor Candy Bingham is calling for the NSW Government to undertake an inquiry into the...