Love, laksa, and a lasting legacy 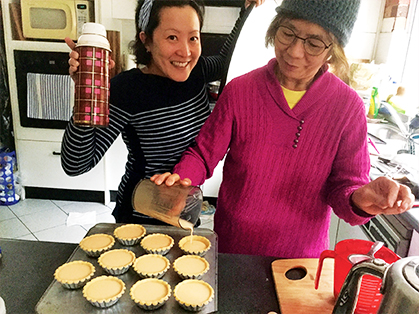 In 2016, 34-year-old Katrina Lau Hammond was a young and fit freelance food photographer, recipe developer and mother to a three-year-old and six-month-old.

All this changed when she started having problems with her left breast. While she initially thought it was a blocked duct, after a small drop of blood came out in her milk Katrina knew something was wrong.

A visit to the breast specialist and three biopsies later, she was diagnosed with advanced breast cancer. She has no family history of the disease.

The Chatswood local has since battled four years of relentless diagnoses and treatment, now currently fighting the further spread of her metastatic breast cancer.

It’s a journey that inspired her to write two books – a picture book to explain cancer to young children and a cookbook sharing the recipes of her beloved mother as a legacy for her own kids.

Here, in her own words, Katrina shares the story behind ‘Makan at Mum’s – A Cookbook’.

The initial inspiration came when we visited my brother and sister-in-law’s place in Lake Macquarie last winter.

As usual with my family, everything revolved around food and I started to think we should really document my mum’s recipes. Mum’s 70th birthday was coming up at the end of the year and I thought of a different way to celebrate - I would help her photograph and write her recipes down and create a cookbook as a gift.

I flagged the project idea with Mum. At first, she was dubious, but soon warmed to the idea.

I would say growing up, my Mum was encouraging, but that sometimes we didn’t agree on things. I thought her too strict, she thought my ideas too rash. I suppose a typical mother-daughter relationship.

Since the birth of my son, and then two years later, my daughter, my Mum has been absolutely instrumental in the nurturing and upbringing of my kids. She could love them openly and spoil them, the right she had earnt as a grandparent.

Of course, with each cancer diagnosis (in 2016, 2017, 2019 and 2020) my parents have been devastated as much as we have, or perhaps even more so. There is a constant stream of dinners, cakes, and soups coming from my Mum’s kitchen to my house.

So, after brainstorming the old family favourites and dishes we wanted to know how to cook, we just started cooking and photographing. We made mistakes, learnt from them and tweaked our methods and processes along the way.

It’s been fascinating reminiscing about all the memories associated with the dishes in the cookbook.

It was mostly my Mum and I working on the dishes each Wednesday, with my Dad assisting, and that in itself was a lovely little ritual.

We both fell in love with the process, and after five months we had over 70 gorgeous photos and recipes we were proud of. It’s been a great bonding experience for us.

We’ve also had some really difficult moments. The second cancer spread in November 2020 was discovered after I complained of being short of breath and had an ongoing pain in my scapula that could not be alleviated by anything I tried. I was rushed in for urgent heart surgery.

A few days later, my specialists confirmed my already-advanced cancer had spread even further, now to my brain, lungs and spine. That part was really confronting as we had to have conversations about the end of life and think about things like my wishes for resuscitation or not.

That time, those nine days in hospital and the weeks that followed once I was home, were full of tears and dark, all-consuming thoughts.

When I was urgently admitted to hospital, twice, I jokingly (but also not joking) asked my husband to make sure my book got published, just in case I died.

While the original premise of the book was a memento to pass down old favourite recipes within our family, it escalated to a Kickstarter campaign with a huge amount of support from family, friends and more than 800 backers getting behind us.

Now that the book is being published, I hope my kids feel proud of us and what we will have achieved in the years to come.

I also hope that they feel a connection to us, each time they look through it, even after we have moved on to the next place.

Those interested in ordering a copy of ‘Makan at Mum’s – A Cookbook’ should visit makanatmums.com. Ten per cent of each sale will go to the Australian Cancer Research Foundation.