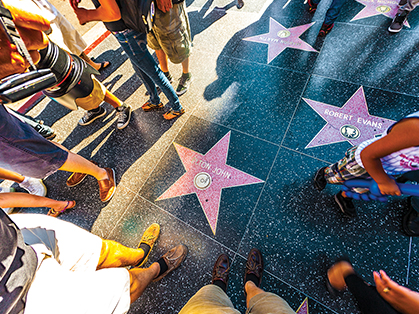 Cremorne could soon have its own slice of Hollywood glitz and glamour, with a Walk of Fame proposed for Military Road.

Local business owner and president of the Cremorne Chamber of Commerce, Ulrik Funch, is lobbying North Sydney Council to create a walkway for the busy road immortalising the names of Australia’s film icons.

A-listers from across the ages such as Erroll Flynn, Cate Blanchett, Nicole Kidman, Russell Crowe and the Hemsworth brothers could have their names carved in stone outside the heritage-listed Hayden Orpheum Theatre, with Mr Funch already collecting more than 1,000 signatures of support from locals.

“We’ve got the iconic Orpheum and people come from all over Sydney for it. It’s fantastic. A Walk of Fame would just lend itself so well outside the picture show there and up to Cremorne Plaza,” he tells North Shore Living.

Mr Funch says the attraction has widely been supported by local business owners, and he believes it could revitalise the area like the plaques along streets in Paris or London.

He said he would like to see plaques that feature information about each star, including highlighting those with connections to the North Shore such as Jacki Weaver and Mel Gibson.

If constructed, the walkway would be the second of its kind in Sydney, alongside the ‘Australian Walk of Fame’ at the Ritz Cinema in Randwick.

North Sydney Council is receptive to the idea, with Council’s project manager indicating at the last meeting of the Cremorne Shopping Area Streetscape Committee that Council would begin conversations with the Orpheum Theatre.

General Manager of the Orpheum, Alex Temesvari, told North Shore Living while the picture palace has not officially been approached by Council as yet, he sees the proposal as a ‘relatively positive’ and ‘cute’ idea.