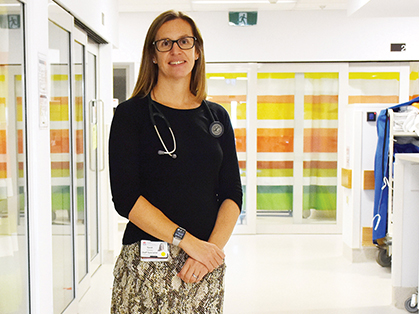 2020 has tested us in so many ways, from the Black Summer bushfires to the ongoing COVID-19 pandemic. But, as the saying goes, ‘When the going gets tough, the tough get going’, and North Shore Living wanted to once more shine a light on some of the standout individuals and groups that have appeared in our magazine throughout this unprecedented year because of their devotion to helping others.

If there has been a more courageous group this year, only our hero firefighters would come close. Healthcare workers have been on the frontline of a threat they knew almost nothing about and couldn’t have planned for. There were no guarantees personal protective equipment (PPE) would protect them and their families from COVID-19, yet our medical professionals fearlessly forged on through the pandemic; saving lives, caring for patients and working tirelessly in the fight to overcome the coronavirus.

North Shore Living spoke with Dr Sarah Wesley, deputy director of Royal North Shore’s (RNSH) Intensive Care Unit in June, and she told us, “You did have to take a bit of a leap of faith that the PPE was going to protect you.”

“I don’t think anybody is going to tell you everyone was perfectly ok with the situation. I think that would be a bit unfair – I mean nurses could spend their entire 12-hour shift with COVID patients,” she continued.

“But those anxieties were allayed somewhat with intensive training, and as you build relationships with the patients, that brings comfort too.”

“[COVID] all happened very quickly… We were all very nervous at the beginning, because we were looking at what was taking place in other countries around the world and thinking that could happen here,” Dr Saadi explained.

“There was definitely some concern, because we would be the ones spending time with the infected patients and seeing them get very sick. We probably didn’t feel ready for that as fresh med student interns.”

Before COVID took hold, Australia was brought to its knees by the unprecedented ‘Black Summer bushfires’. Multiple states of emergency were declared in NSW, Victoria and the ACT, as more than 10 million hectares of land burned.

Fire and Rescue NSW and the NSW Rural Fire Service mobilised thousands of firefighters to help battle the catastrophic fires. Many had to leave their families over Christmas and the New Year, putting themselves in harm’s way to save lives and homes.

North Shore Living spoke with Chris James and Genevieve Delves from Willoughby Fire and Rescue, who were called into action a few days short of Christmas to fight the Gospers Mountain mega-blaze – which was threatening to jump the Hawkesbury River and make a run into Sydney’s northern suburbs.

“We were surprised to come across a house where two old people were bunkered down,” Chris James, recalls.

“We got them out into their car, they drove away and an hour later we came back and their house was completely destroyed… They would have been gone if they didn’t get out.”

Ms Delves recalls helping a young man – who was standing atop his roof defiantly – to fight tooth and nail to save his house. She told North Shore Living it was a bittersweet outcome for the man, as his house was the only property they managed to save.

“From what I understand, it still just rattles him a little bit – the magnitude of what he actually experienced and, I guess, just the sadness that all his neighbours lost their houses,” she said.

This magazine isn’t big enough to praise the feats of all the local community members, who went above and beyond to do what they could to keep our spirits up and help those on the frontlines.

During the fires, Mosman resident Blair Leslie, backed by Rotary, travelled to the towns of Clarence, Capertee, Dargan, Ilford, Rylstone, Glen Alice and Olinda to distribute 1,750 face masks to locals.

Allowing those that lost property to safely go into fire damaged areas and clean up and sort through the debris.

Ian Pagent, part owner of Bathers’ Pavilion, was approached by two of his staff with an idea for a fundraising night, and the Balmoral institution raised more than $200,000 for the RFS, Red Cross and WIRES.

As for our COVID community heroes, Kaylie Smith deserves special praise for starting a global movement.

The Castlecrag local asked RNSH staff directly, what they needed during this trying time – the response an emphatic ‘coffee’.

Social media savvy, she established the Facebook and Instagram pages @buythemacoffee. From there, it wasn’t long until the initiative went viral.

“We have now raised over $90,000 and delivered more than 20,000 coffees across Australia,” Kaylie explained to us in June.

“We're live in every state, as well as New Zealand and the UK.”

Or what about Crows Nest local Katie Liew, who created a virtual mothers’ group service, so new parents can still access the vital support they rely on at such a critical and overwhelming time.

The Willoughby Symphony Orchestra did what it could too. Dr Nicholas Milton, artistic director and chief conductor, along with his passionate and talented musicians, set up a Facebook page and offered free virtual concerts to keep spirits up.

“In these unprecedented times, when many of our audience may be experiencing isolation and anxiety, the musicians and I felt it was incredibly important to maintain a connection with them,” Dr Milton told North Shore Living.

From the North Shore Living community, thank you to all of our inspiring local heroes!

Befriend a Veteran
CCNB is looking for kind, friendly locals to provide social support to war veterans in the...
Assist Native Wildlife
Support the incredible work local service Sydney Wildlife do to rescue and rehabilitate...
From Norway to the Northern Beaches with love
An Aussie expat’s love of the Peninsula has motivated her to create a Freshwater ferries...
Volunteering across Pittwater
Eager to give back to your community? Check out these great opportunities to volunteer in...
A home for healing
An innovative housing initiative on the lower North Shore is shedding light on the...