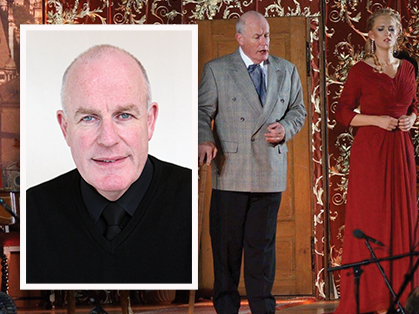 One of the Northern Beaches’ more successful cultural exports, baritone opera singer Martin Cooke is to retire after 30 years with the Chorus of the Bavarian State Opera, including 28 years as a permanent member of the internationally renowned German opera company.

“It is time to retire after reaching the mandatory age of 65 and nine months,” Martin tells Peninsula Living.

Martin is the son of former Mayor of Manly, Joan Cook, who aside from being the first female deputy mayor of Manly was herself a critically acclaimed soprano and radio star of the 1940s.

Before embarking on an opera career, Martin had trained for the priesthood, but his passion for music proved too strong.

“Forty years ago, during theological studies, the realisation came that my true vocation was to be a professional singer in the world of music and opera,” said Martin, announcing his retirement this week on his Facebook page.

“Thankfully my association with [the Bavarian State Opera] will continue as a freelance singer, jumping in for indisposed colleagues and when larger vocal forces for major operas are required.”

The Bavarian State Opera is regarded as being among the half-dozen of the world’s leading opera houses.

“I can only look back with a sense of gratitude to have been a permanent member of this great chorus and our international opera house,” he continues.

Martin will continue also to be a member of the soloists’ ensemble with Salzburg Cathedral, “Where I have loved singing the most in my career since 1993.”

He last appeared in Sydney in 2016 for a concert performance at the Sydney Conservatorium, and also took the opportunity to put on a special performance for his old parish at St Mary’s Church, Manly.

“I hope to continue performing popular concerts in a voluntary capacity for my neighbours, the local community and especially bringing music to those in aged-care facilities,” he says of the future.

A vintage-car enthusiast, Martin will now also have additional time to devote to his immaculate two-tone 1959 Ford Fairlane Galaxie, a regular fixture on the streets of Munich and surrounding country roads.

Befriend a Veteran
CCNB is looking for kind, friendly locals to provide social support to war veterans in the...
Assist Native Wildlife
Support the incredible work local service Sydney Wildlife do to rescue and rehabilitate...
Top 5 interstate holiday spots
Australia’s state borders are reopening, and now is the time to do your part in boosting...
The Aussie cossie
For the first Harbour people and the early European settlers, the only bathing suit was the...
Volunteering across the Northern Beaches
Eager to give back to your community? Check out these great opportunities to volunteer in...