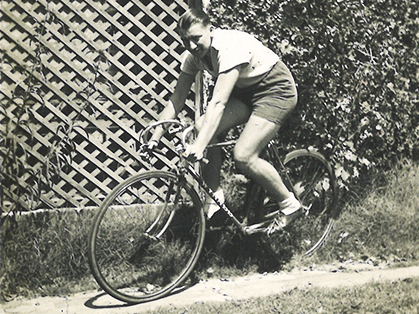 Cycling in Sydney is very different from peddling around in Amsterdam, Berlin or Canberra. The traffic is less forgiving, the dedicated bike lanes are still few and far between and the hills are… well pretty hilly.

That might explain the prevalence of Sydney’s serious cyclists, the famous middle-aged men in lycra or MAMLs. They ride top-end racers, kitted out in the best gear - chamois shorts, clip-on shoes and glare-proof glasses. Sydney cycling is competitive, in every way.

Resplendent MAMLs are relative late comers to the scene but cycling in Sydney has long been dominated by men. The Sydney Bicycle Club was racing around dedicated tracks in the 1880s and young men were ‘scorching’ on public roads and frequently falling off – as was reported in 1896 when one Sid Black hit a cow on a downhill stretch near Pymble. He survived.

Of course, women also rode but usually not so dangerously and with far more scrutiny. In 1894, the Sydney Mail carried the following qualified endorsement of female cyclists from a Dr Richardson: ‘All conditions being normal women can indulge in the exercise just as safely as men… [but] girls should not ride regularly until they have reached their 17th birthday and not then until they are strong and well formed.’

In 1933, 13-year-old Alan Willoughby was one of four brothers in suburban Cammeray but the only one who longed for a bicycle. He wanted to see the world beyond the local shops or the tram ride to the city.

He received his first machine that year and promptly rode solo to Wyong and back in a day, a trip of 200 kilometres. Alan got his first job in 1938 and rode to Botany and back each day.

Such was the availability of tram and train transport on the North Shore that Alan was the exception as a commuting cyclist.

In 1938, Alan spent his two-week annual holiday riding to Brisbane and back. The next year he rode to Canberra. After that he cycled the round trip to the Victorian Alps.

Alan’s first machine was a Niven, his second was a Wynall and the third, bought in 1941 before he joined the army, was a Healing. All were Australian-made, such was the vitality of small-scale manufacturing in this country.

Alan Willoughby cycled all his life, and he passed away in 2020 aged 100. Alan still had his 1941 Healing modified so that it worked as a stationary exercise bike. He peddled the requisite five kilometres a day in his sunroom well into his 90s.

That bike is part of the Willoughby family collection generously donated to North Sydney Council. You can see the 1941 Healing and other items at the North Sydney Heritage Centre in Stanton Library from June.

Empower young women
Assist local girls and young women to become confident, self-respecting, and responsible...
Shop-top scrapped
Plans for a three-storey retail and shop-top housing development have been knocked back...
Free, healthy meals
The Community Pantry is back offering sit down meals to anyone in need on the Northern...
Finding their sea legs
An Avalon couple are trailblazing a new on-water alcohol delivery concept, and despite...
Heart attack service saves lives
Heart attack patients on the Peninsula will now be transferred straight to Northern Beaches...