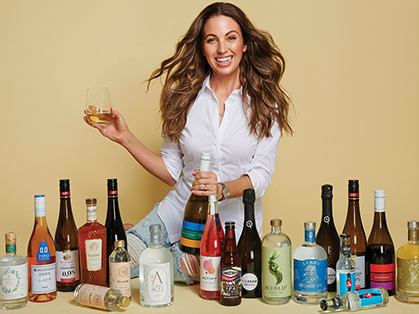 Irene Falcone created the $20 million empire Nourished Life with $100 to her name and now she’s on a mission to help shape Aussie culture for the better, as North Shore Living’s Joe McDonough finds out.

Thanks so much for sitting down with us Irene, I know you’ve been very busy with your new venture. But before we talk about that, we should probably start with Nourished Life?

Ten years ago, natural products or sustainable products were really niche. And at the time I was working in the corporate sector and I had the opportunity to do volunteer days with an organisation that had just campaigned to get BPA out of baby bottles and that really opened my mind to the type of toxins we put on our bodies and in the environment.

The first product I sold was this vegan lip balm, and I put this post up on Facebook saying, ‘Did you know you can now buy a lip balm that isn’t made of mineral oil?’ At the time, too, there were microbeads in facial scrub. It’s banned now, but back then I was saying, ‘Guys, you’re using microbeads to exfoliate your skin in a mineral oil-based product – that’s not only bad for your skin but it’s not good for the environment’.

It started with a small group of people, and I ended up growing that Facebook page from 100 to more than 250,000 people.

I was fortunate with Nourished Life, that I’d jumped on a niche that ended up becoming the mainstream. It was around that same time that social media started to take off, and people were becoming more comfortable using their credit cards over the internet.

In five years, you turned your e-commerce enterprise into a one-stop-shop for natural skin, body and hair care; makeup; and other products, valued at $20 million…

That’s right, so I sold Nourished Life for $20 million (in 2017), but I’ve stayed on as an ambassador because I still believe in the brands that we stock.

People think with $20m I should retire, and I basically did for a little while. I bought my beautiful home in Clontarf and my Porsche, and that was really great… for about six months. But then I began to miss interacting with customers, running the warehouse, getting dirty, and most of all disrupting industry – I really, really loved disrupting the beauty industry. So, I asked myself, ‘What can I disrupt next?’

Indeed, and you chose the liquor industry?

I’d personally cut down on my drinking, because I was probably drinking way too much being a business owner and also living it up. And I went into a bottle shop one day, and I asked, ‘Do you have any non-alcoholic wine?’ And the person shot me this same look I got ten years ago, when I walked into a pharmacy and asked for natural deodorant. I thought, ‘Oh my God, here we go again’, and the idea of Sans Drinks came from there.

So, I’m only targeting people who drink alcohol, getting them to swap out like half or 60 per cent of their weekly drink with non-alcoholic alternatives.

So, it’s more than disrupting industry, it’s almost an obsession to help people better themselves?

Absolutely, I’m disruptive and obsessive as an entrepreneur. It’s really interesting, because I’m helping people who drink too much and when we talk about being addicted to alcohol we think of AA, but how many of us really do crave a drink every Friday night? That might not be an addiction but it is a habit, and those habits aren’t healthy for us. I have a business that is helping people break those habits and I love helping people… That’s my passion.

Do you think you’re pioneering a culture shift?

I’m trying. And because of Nourished Life I’ve got the confidence that I can do it, and I’ve got the money to invest in it as well. I think about Nourished Life and I had no money, I started that business with $100. Looking back, I don’t know how I did that, because it’s bloody expensive starting a business.

Many people will be on holidays and indulging as they read this, why should they consider switching to a Sans Drinks product?

I commissioned some research recently, and did you know that one in five Australians still get behind the wheel after having a drink not knowing if they’re over or under the limit? There were a lot of other shocking stats in that research, but I got a bit emotional when I read that one. So much of what I do is aimed at people being able to socialise and have a great time and enjoy their festivities but not put their lives or other people’s lives at risk.

Finally Irene, you stock some big name brands like DeBortoli, McGuigan Wines and Heineken, what is your favourite Sans Drinks product?

There is a non-alcoholic, champagne alternative called Noughty – get it [laughs]? Not only is it non-alcoholic but it’s also organic and low in sugar, and because we’ve taken out the alcohol it’s a third of the calories. It’s definitely my best seller and it tastes just like champagne without the guilt!

Check out the Sans Drinks range at sansdrinks.com.au.

Breakout: “I was fortunate with Nourished Life, that I’d jumped on a niche that ended up becoming the mainstream.”

Save the Orangutans
Be an environmental crusader and volunteer to raise funds and awareness for the...
Help Regenerate Our Bushland
Eager to get outdoors this summer and give back to your community at the same time?...
Befriend a Veteran
CCNB is looking for kind, friendly locals to provide social support to war veterans in the...
Assist Native Wildlife
Support the incredible work local service Sydney Wildlife do to rescue and rehabilitate...
From Norway to the Northern Beaches with love
An Aussie expat’s love of the Peninsula has motivated her to create a Freshwater ferries...