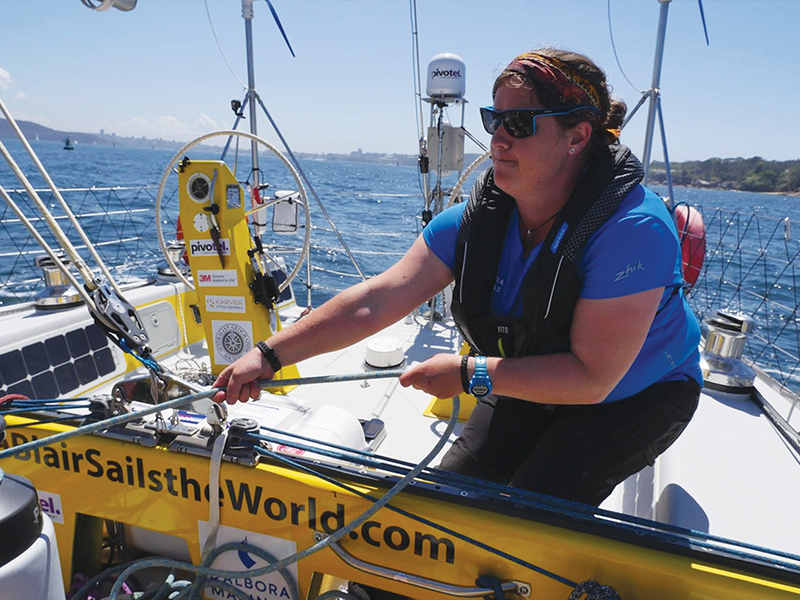 Lisa Blair isn’t one to take the path often travelled.

Her love of navigating the seas began when she joined a team of amateur sailors in a yacht race around the world.

“When I got back from that circumnavigation, I had the epiphany moment when I realised, ‘Wow, I’ve just sailed around the world on a boat. What else can I do?” she tells North Shore Living.

She was told of a record set by Russian adventurer FedorKonyukhov in 2008 for the fastest solo, non-stop trip around Antarctica - and the rest is history.

“I instantly didn’t want to do it because I knew how hard and dangerous the Southern Ocean was, but the idea was sown then and there and I just couldn’t get it out of my mind,” she says.

So, commenced three and a half years and 4,000 miles of arduous unassisted training and preparation before she started a six-month journey around the icy continent.

“There was a lot of learning about myself and how I cope in extremely difficult situations,” she recalls.

“Once I found my trigger points, I worked out better ways to manage those scenarios, and by the time I went and sailed around Antarctica, I felt I could handle almost anything.”

This training did not prove in vain, as 1,000 nautical miles of the coast of South Africa in the Southern Ocean, Lisa faced the most dangerous situation imaginable – her mast snapped in 40 knot winds and eight-metre waves.

“I was in an ocean where rescue was not an option,” she muses.

Her months of preparation kicked into gear, and Lisa was able to navigate to Cape Town successfully, although her speed record goal had to be abandoned.

Despite this, she journeyed on and became the first woman to circumnavigate Antarctica solo.

Incredibly, she remains unfrightened by the raging storms that can engulf the wild seas.

“You’re riding through these incredible waves and the wind is so strong you can only get a breath of air by turning your head away from the wind,” she recalls.

“You’re in this tiny boat in the middle of this great big ocean and you’re witnessing something nobody gets to see.

“Once I know the boat is okay, it’s really amazing to just sit there, take it in and see the power of mother nature.”

Since returning from this historic voyage, Lisa has set two more world records by sailing non-stop and unassisted around Australia for 58 days.

She says, despite the extreme exhaustion experienced during these extraordinary quests, she is eager to return to the beauty of the high seas.

“In the middle of the ocean, you have these calm moments you don’t get anywhere in your life on land because everything is so busy. It’s all those moments I get that keep me going.”

Alongside her journey to the Artic, Lisa is working on a documentary of her journeys and is currently writing a book about her Antarctica navigation.

“For me, is about understanding I am far more capable than I ever expected. It’s following that mindset of finding out how far I can take it,” she reflects.

“It’s as if Chinese New Year never happened”
Turnouts at Lunar New Year celebrations and Chatswood retailers have taken a blow, with...
Protest and petition forces bus sell-off debate
The Berejiklian Government will have to debate plans to privatise the Northern Beaches’...
No more flying under the radar
The Sea Eagles shocked many with their run to the finals in 2019, but they won’t have the...
Fear mongrel-ing over parks management plan
Mosman Council has quashed rumours of Reid Park and Sirius Reserve losing their off-leash...
Get active for mental fitness
Local initiatives Gotcha4Life and Head Above Water are joining forces to host Mental...