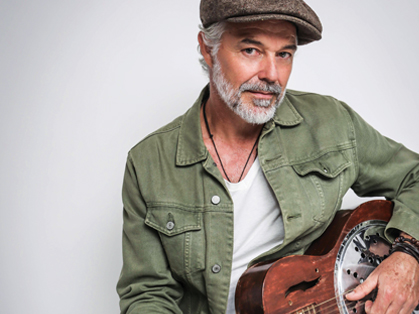 Entertainer extraordinaire Cameron Daddo and his family had to start over after moving back to Australia from the US, but he tells Peninsula Living’s Joe McDonough that life has never been better!

When Peninsula Living catches up with Cameron Daddo, he recaps the sort of morning we can only dream of.

Just prior to our chat, the popular Aussie entertainer had been shooting a scene for Home and Away. And being an avid surfer, Cam had headed up to Palm Beach from his Curl Curl home a couple of hours before his call time to catch a few waves and then enjoy a coffee and take in the idyllic setting.

“It is the dream job; it’s such a well-run set and the actors are all great... It just felt like I could do this forever!”

Later today, after our interview, Cam will put on his headphones and ‘go to work’ as smoothfm’s evening host, which he’s done for almost 10 years.

Due to COVID-19, that means playing hit after hit from the comfort of his home.

“It’s something I’m pretty used to. I mean in the States, I was doing Smooth from my walk-in wardrobe,” he laughs.

“The only difference now is that I have a dog sitting on my foot as I do it, and if someone knocks on the door he’ll jump up and bark, and I’m like, ‘Oh, dude, you scared the crap out of me!’

“It’s nice though, I’ve got the candle lit, the lava lamp going, doing Smooth from my studio.”

The eldest brother of the over-achieving Daddo trio (along with Andrew and Lachlan) left for Los Angeles in 1992 and only returned to Australia with his family four years ago.

There, the Logie-winner had scored roles in a raft of hit TV shows such as 24, CSI: Miami, Boston Legal, NCIS and The Mentalist.

When he and wife Alison Brahe began to yearn for home, there was only one place they were going to eye real estate.

“It’s always been the Northern Beaches for us,” he reveals.

“Even before we went to the States, we lived in Avalon and then Bilgola.”

Of course, his three kids Lotus (24), River (20) and Bodhi (14) were born and bred in the US, and the last time Cam and Alison were living on the Peninsula, Miley Cyrus’s dad was topping the charts with Achy Breaky Heart, so the move has been a culture shock for the whole family.

“They say moving house, divorce, a death in the family, they’re all akin to each other, they come with big feelings,” he reflects.

Back in the US, Cam and a group of like-minded men were meeting regularly to share their feelings in a judgement-free forum.

“I missed having these guys to blow off steam with, we would all open up about what we’re going through and then comment on how we can relate to those challenges,” he explains.

So, he set about founding mymensteam.org, a men’s emotional health support network, and it has helped him navigate the “rigours” of starting over. In fact, so essential is the service proving to be, it became a full-fledged charity this year.

He and Alison have also been helping couples through their podcast Separate Bathrooms – and Other Handy Marriage Tips.

“We’re coming up to our 50th episode, I think, which is really exciting!” Cam acknowledges.

“If we can help just one person, I think that is payment enough, and every show we do we get several responses just saying, ‘Thanks so much for putting this out there’.

“That’s why we did it, because there's no handbook [for marriage] out there. People would say to us, ‘Oh, you guys have got this great relationship’, and we do, but we have had to work at it.

“So, we sort of pulled the curtain back on what we go through, just to let people know that there's no magic wand… When someone else is dealing with that same thing you’re going through, you don't feel quite so alone.”

Incredibly, Cam even found time earlier in the year to release his fourth EP Son and Moon, and the talented muso is champing at the bit to play live gigs again – with dates across the Northern Beaches set to be pencilled in for February.

Listen to Cam from Sunday through to Friday on smoothfm from 9pm to midnight.

Befriend a Veteran
CCNB is looking for kind, friendly locals to provide social support to war veterans in the...
Assist Native Wildlife
Support the incredible work local service Sydney Wildlife do to rescue and rehabilitate...
The love bug
One of Mosman’s most beloved couples talk about their devotion to love, family and...
We need to talk about menstruation. Period
Dee Why’s Dean and Nina Tavener are dedicated to breaking down the stigma around...
Art prize pushes boundaries
There were a number of firsts in the 2020 edition of the Ravenswood Art Prize, including a...