A short history of the long life of flats 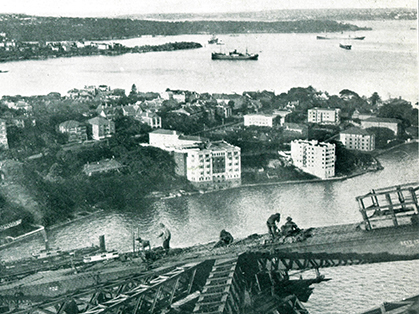 New South Wales has nearly half of Australia’s apartment buildings. Unsurprisingly, most of those are in Sydney. It is nearly impossible to drive anywhere on the North Shore without seeing a crane on the horizon, hovering over the site of another large residential development. But while it is true that the trend towards apartment living is increasing dramatically, the people of North Sydney have been living in flats for well over 100 years.

Indeed, the first block of flats still exists on the Kirribilli waterfront. ‘Beulah Flats’ – the first of its various names – was built in 1908. Others followed slowly, but by the 20s and 30s that part of the North Shore was rivalling the eastern suburbs for the number of apartment buildings it accommodated. Many more were built along East Crescent Street down to McMahons Point. A group even sprouted up at Kurraba Point in the early 30s – the realised dream of Ernest Keith White, reputedly after several lucrative days at the races in 1928.

Before poured concrete and steel frames revolutionised construction, these were brick structures. They were often extravagantly appointed with beautiful timber common stairwells, glazed tiles and coloured glass. In those early years of car ownership, a few even provided garages for some residents.

Despite the modern life they enabled, the earlier blocks often featured elements of much older architecture; the castellations of castles, for instance, or the darkened timber of a Tudor manor. Their grandiose names typically featured the words ‘Court’ or ‘Hall’. ‘Bellarion Court’ near Lavender Bay was finished in the exotic Spanish-style of movie-star Hollywood. Later, blocks in the 30s took on the futurism of the various Art Deco styles, streamlined curves most obviously. These did seem to fit the lifestyle they promised for a new generation, including single independent women.

Most were ‘walk-ups’; that is, they were no taller than three stories and those residing on the second and third floors had to literally walk up rather than ride a lift. So, too, did the grocers or baker’s boys, for many flats from this period were built with small chutes beside the door in which to place bread or milk deliveries.

Concrete and steel came after World War Two and building heights soared. Famous Blues Point Tower, conceived in the late 50s and built in the early 60s, dwarfs the block of flats next door which had only been designed a decade earlier.

For all their charm, flats built before the 50s are gradually being replaced by new blocks. It is not quite like for like, though the size of the individual apartments is not necessarily bigger, the densities have increased. Accordingly, now nearly 90 per cent of North Sydney’s dwellings are in medium or high-density buildings. The state average is just 33 per cent. The demand for more car spaces is greater than ever before. And gone, for the most part, is the detail and the finish – the timber and the tiles. While convenience and cost is as important now as it was then, it would be a shame if we were to lose too much of the heritage of our compact lives.

Ferry rich history
With the fate of the Freshwater-class ferries in doubt, local historian Richard Michell...
The North Shore's unsung heroes
As the saying goes, ‘When the going gets tough, the tough get going’, and North Shore...
Northern Beaches commuters thrown under the bus
Significant changes to the Northern Beaches bus network will be ushered in by the State...
Volunteering across Pittwater
Eager to give back to your community? Check out these great opportunities to volunteer in...
Top 5 Northern Beaches Christmas activities
In the spirit of the season, we’re gifting you our top five festive picks for COVID-safe...

Buy 2 Consultations Get 1 for FREE!