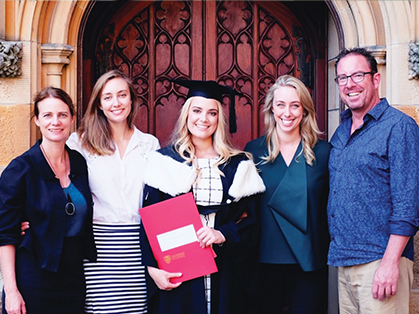 Dr Peter Downey sat momentarily confused. His daughter Rachael had sent him a pic of her husband lying on the couch, with a book in hand.

And it wasn’t just any book, but a title he himself had penned – So you’re going to be a dad?

“I wasn’t sure why Ben was reading it, so I asked Rachael if it was for his own amusement or he was just doing it because he’s my son-in-law, and she laughed and said, ‘No Dad, I’m pregnant!” Peter tells Peninsula Living.

As Oxford Falls Grammar’s current principal, and a long-time English teacher in schools from Dee Why to Warriewood, Peter has been educating local kids for more than 30 years.

For most of that time, outside the school grounds and a world away from Shakespeare’s plays, he’s also been imparting his learned wisdom on men across the globe facing an alien life experience – the birth of their first child.

He’s been doing this through that same book his son-in-law is currently working his way through. First published in 1995, Peter has since updated his witty and informative read on three different occasions to ensure it doesn’t become stale and outdated. His latest re-release came this year to coincide with its 25th anniversary milestone.

“I was a young dad in my early twenties, and aside from anecdotal observations, I had very little idea about what I was meant to do,” he recalls, when asked what inspired him to write.

“I felt rather ill-equipped and I couldn’t find a book that really appealed to me. So, I started writing this kind of journal, my thoughts and ideas about navigating this thing called pregnancy and discovering interesting things along the way.”

He was blown away by its instant success, defying the expectations of his mates, who couldn’t believe he had the audacity to call himself an author.

“They were like, ‘Don’t be so pretentious, who wants to read what you’ve got to say?’” Peter laughs.

“But [global publisher] Simon & Schuster came back and said, ‘There’s a market for this, we need this book.

“Then it just went gangbusters. It went international and I had to translate an edition for the American market, and then it was translated into different languages and sold throughout Europe.

“I think the appeal of the book was that it wasn’t written by an expert… All the books were by doctor somebody or professor somebody and it was all very clinical. Whereas, I was transparent and human.”

Peter is now in the planning stages of his next book – So you’re going to be a grandad?

To find out more about Peter or order his book, visit peterdowney.com.au.

Assist Native Wildlife
Support the incredible work local service Sydney Wildlife do to rescue and rehabilitate...
Befriend a Veteran
CCNB is looking for kind, friendly locals to provide social support to war veterans in the...
The Aussie cossie
For the first Harbour people and the early European settlers, the only bathing suit was the...
Volunteering across the Northern Beaches
Eager to give back to your community? Check out these great opportunities to volunteer in...
Questioning the status quo
Irene Falcone created the $20 million empire Nourished Life with $100 to her name and now...