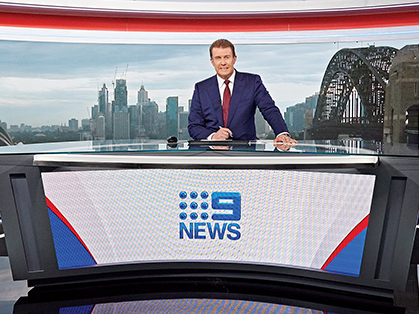 For someone who has covered 9/11, and the Bali bombings, it was going to take something almost beyond imagination to emerge as the biggest news event Peter Overton AM has reported on.

“COVID has been the biggest story any of us have ever covered,” he says, without hesitation.

“When Scott Morrison brought in the very first restrictions, we started doing late-night bulletins and getting huge numbers, huge ratings across the country, because people were so hungry for information.

“We were doing a dozen interviews a night, and I remember thinking, ‘Just ask the questions that the person sitting at home on the couch wants to know’, because we’re all in the same boat wanting to know the answers about a subject that no one really knew where it was going to take us.

“So, it’s been incredibly stimulating, I wish it hadn’t happened, but incredible professionally.”

Of course, that’s not to say those aforementioned events haven’t stayed with Peter. He still keeps in touch with several survivors of the horrific Kuta blasts, while the aftermath of the Twin Towers terrorist attacks remains a vivid and haunting memory 20 years on.

“I can still remember every detail of my two weeks in New York reporting on that, like it was yesterday,” he says.

Peter – who grew up in Longueville; was school captain of Lane Cove Public; and went to North Sydney Boys High, just as his father did – was always certain he was destined for a career in media.

Work experience as a 15-year-old with 2UE and then Sky Racing set him on his path.

After a short stint in Adelaide working as a sports reporter for Channel 7, Peter returned to the North Shore to begin his formidable association with the Nine Network.

“Then I moved to a semi in Cammeray, which I bought for $336,000, and that would be worth a bomb now too… I’ve never strayed too far from the North.”

And what is it that drew him to television?

“I'm very interested in people's stories and backgrounds,” he smiles.

“Even to this day, my wife (Jessica Rowe) laughs at me when we go out for date night, because I'll basically interview the waiters.

“But that’s what drew me to the media, I just love stories, and I love being in a position to tell people’s stories.”

Over the course of his 30 years (and counting) with Nine – including almost a decade as a reporter with 60 Minutes – he has even become the story once or twice.

No more famous example than when Peter felt pressured to spend four hours in a Church of Scientology “crash course” in order to interview Tom Cruise.

The sit-down with the actor then went pear-shaped as he became confrontational.

Questions about Scientology and Tom’s ex-wife Nicole Kidman – who Peter grew up next door to and calls a “great friend” – irritated the Hollywood megastar, who told his interviewer he is “stepping over a line” and to “put your manners back in”.

“I just maintained my composure, and I think that was the key for me,” Peter recalls.

“I'm not a guy who gets angry or shouts, so I just said, ‘I'm sorry if I offended you, but I think they're fair questions’.

“I wasn't going to give him a free kick,” he laughs. “It’s definitely one of the interviews I get asked about on a regular basis.”

Then, in November last year, Peter again made headlines when he had to be rushed under the knife, after the detection of a melanoma.

“I have very fair skin, I've got lots of freckles,” the father-of-two acknowledges.

“My dad's best man was an eminent dermatologist, and when I was a little boy he said to my parents, ‘You're going to have to watch Peter's skin, he's very fair’.

“So, I go to my dermatologist every six months, but recently we cranked it up to every three months because I'm getting older.

“He noticed something behind my hair, and said, ‘That's changed Peter’, and within 10 days I was on the operating table.

“They got it early so I’m all good. The pathology is all good.”

And as you’d expect from this consummate professional, he was back behind the news desk just a week later.

“Thankfully, the scar is on the side of my head, not visible straight down the barrel of the camera,” he grins. “Then again, I did show it off a couple of times on-air.

“The upside is we got the conversation going again. We brought [skin cancer] awareness to the front of the queue again!”

The widespread concern for Peter’s health is testament to the relationship he builds with his audience.

Hundreds of thousands of Sydneysiders tune in to Nine News at 6pm every night just because Peter is in the hot seat.

So dominant has he been, that 2020 marked his 10th straight year at the top of the ratings.

“We have a great environment in the newsroom and I'm merely representing every reporter, producer, editor, graphic artist, helicopter pilot, cameraman, soundman,” he says of the milestone.

Asked what he puts his popularity down to, and he says authenticity.

“What you see on the screen is who I am off the screen,” he offers.

“For anyone thinking about going into television, just be who you are and be true to who you are, because I think the audience is pretty perceptive.”

And fear not, Peter has no intention of disappearing from our screens any time soon.