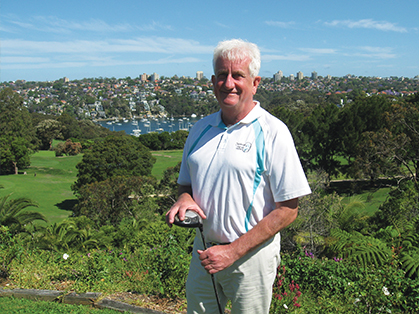 Philip Lewis is enjoying his second last day in the post, when North Shore Living gets in touch.

In a matter of hours, he will attend his last Northbridge Golf Club AGM; hand over the presidency to vice president David Starte; and in all likelihood receive a robust *golf clap* for his nine years of service on the club’s board, the last seven as head honcho.

Back in 2011, then president Linden Gulson (who sadly passed away) had been diagnosed with cancer and Phil – sensing he would be dealing with a lot of pressure – said to him, ‘I’ll do anything I can to help you’.

“So, he said, ‘Well you can be the vice president then’,” Phil laughs.

“It wasn’t quite what I was anticipating but I stepped into the role for two years to help him out.

“Then as his time came to a close, it was the logical thing to take over as president.”

When asked to single out his greatest achievement, Phil – who grew up in Turramurra but has lived in Northbridge since 1996 – is quick to deflect the credit.

“There's no great achievement by me, it's always been a team thing, and I’ve been lucky through these years to have an incredible team,” he begins.

“I think our most important improvement has been transitioning the club from being inwardly-focused on golf to being a very community-based sport and social facility… That’s been crucial to the growth of the club over the last decade.”

But as much as the boating enthusiast would like to downplay his influence on the club, he has clearly steered the ship through some very turbulent waters.

Five years before COVID-19 reared its ugly head, Northbridge GC and Willoughby City Council were under mounting pressure from the community to do something about a spate of incidents in which wayward tee shots on the first hole were striking children playing on the neighbouring Northbridge Oval.

“We spent three years resolving that alongside Council,” he nods.

“It was a very expensive exercise, but we redesigned the course and installed netting on the side of the school and oval.

“So, we have a better, safer facility now, and we did it all without bankrupting the club or jeopardising its financial position.”

Then the pandemic hit, and alongside general manager Marko Delatovic, the rest of the board and the club’s army of volunteers, Phil ensured the club navigated its way to safety.

“[Phil and I] went through some very difficult times together – more difficult than most people realise – and I believe Phil was the perfect man to lead us through those horrible times,” he wrote.

“He shouldered the public load, made himself the target and led the Board with strength and intelligence.”

“I don’t think it’s going to help my golf though, there’s still the skill factor missing,” he grins.

Befriend a Veteran
CCNB is looking for kind, friendly locals to provide social support to war veterans in the...
Assist Native Wildlife
Support the incredible work local service Sydney Wildlife do to rescue and rehabilitate...
We need to talk about menstruation. Period
Dee Why’s Dean and Nina Tavener are dedicated to breaking down the stigma around...
Art prize pushes boundaries
There were a number of firsts in the 2020 edition of the Ravenswood Art Prize, including a...
Traumatic trip leads to Bright Futures
When a Nepalese family helped save the life of Jacqui Holth’s husband, they could never...