Superstars of the surf 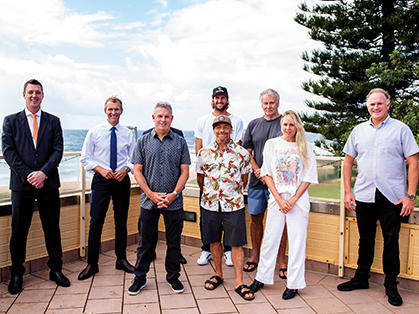 We have waited a long time for this – the grand return of North Narrabeen to the World Surf League Championship Tour (CT) schedule on 16-26 April.

The beach was announced as the third leg of the CT, after COVID-19 quarantine bubbles were set up in NSW and WA – resulting in the cancellation of the regular Snapper Rocks and Bells Beach stops.

And while it might be unusual circumstances that led to its inclusion, the beach is certainly no stranger to elite competition, and arguably should never have been overlooked in the first place – such is its proud history.

In the 70s, the Coke Classic at North Narrabeen became the hottest surfing competition on the planet – boasting the richest purse in the sport over a number of years.

World champions like Mark Richards and the Peninsula’s own Layne Beachley and Tom Carroll etched their names on the champions’ roll before its run ended in 1999.

In fact, a talented 20-year-old by the name of Kelly Slater even made it to the final at ‘Northy’ – losing to Dee Why’s Shane Herring – en route to claiming his first world title in 1992. The GOAT went on to win a couple of Coke Classics in the years that followed.

Slater now returns to his happy hunting ground in good form, having made it to the semi-finals in the season-opener at Pipeline in December.

The Australian swing begins in Newcastle on 1 April, before the best board-riders in the world converge on the Northern Beaches on 16 April in their pursuit for more crucial championship points.

North Narrabeen is a renowned nursery for serious surfers – none better than dual world champion Damien ‘The Iceman’ Hardman.

“We haven't had a combined world tour event on the Northern Beaches for over 20 years, it is going to be great for surfers, particularly grommets, to see the best surfers in the world competing at Narrabeen, the most consistent wave in Sydney,” he says.

“After the impact of the Northern Beaches being forced into a COVID lockdown over the busy Xmas period this event could not come at a better time for many businesses.”

“This highly coveted Championship Tour will bring much-needed tourism dollars into the local shops, eateries, and accommodation here in Narrabeen and surrounds, helping to rebuild our economy after a very tough year for many local businesses,” he said.

“I'm thrilled to see this spectacular event coming to our shores, boosting our profile on the global stage and encouraging a sense of pride in our community.”

Empower young women
Assist local girls and young women to become confident, self-respecting, and responsible...
Heart attack service saves lives
Heart attack patients on the Peninsula will now be transferred straight to Northern Beaches...
School development sparks concern
Mosman Council has raised concerns over the bulk and scale of the proposed redevelopment of...
The crime report: North Shore
Get the lowdown on the recent incidents reported near you...
Bike ramps cause stir
North Sydney Council has ‘strenuously’ objected to a State Government proposal to...