Surfing on the Beaches is back! 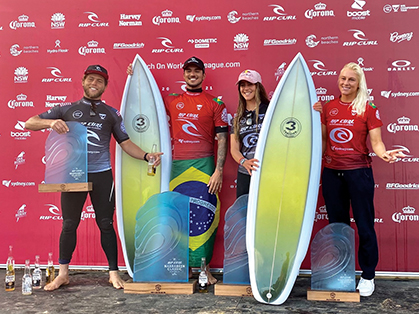 Professional surfing had a triumphant comeback to the Northern Beaches after a two-decade hiatus, with the second round of the World Surf League (WSL) event attracting more than 20,000 spectators.

North Narrabeen beach saw capacity crowds each day of the four-day event to see the world’s best battle it out in ideal surf conditions.

Brazilian superstar Gabriel Medina claimed an emphatic win in the men’s competition, with an almost flawless display in the final against American Conner Coffin.

“It feels amazing,” Medina said. “I finally surfed the way I wanted in the final, just with the waves and the opportunities and I sticked my airs so it feels really good… I missed this winning feeling.

Medina was runner-up in the first two events of the year, and now jumps compatriot Italo Ferreira into first spot on the championship standings as he strives for his third career world title.

In the women’s 19-year-old American Caroline Marks – who is coached by former Australian star Luke Egan – proved too strong for Brazilian Tatiana Weston-Webb with a two-wave score of 12.57 to 11.34.

Earlier, Australians Steph Gilmore and Sally Fitzgibbons were eliminated in the wuarter finals.

Northern Beaches Mayor Michael Regan congratulated event organisers, participants and eventual winners for an outstanding event that had millions of viewers around the world watching on live web streaming and TV.

“We are so proud to have partnered with the State Government to have hosted such a terrifically successful event,” Mayor Regan said.

“Congratulations to the winners Caroline Marks and Gabriel Medina for outstanding, consistent performance that thrilled spectators.

“From the business owners and spectators I have spoken to these last few days, the Surf Classic was a massive shot in the arm our community so urgently needed.

“Not only has the event given the area a much-needed economic boost, but has also lifted the morale of the whole community coming out of a long period of uncertainty.”