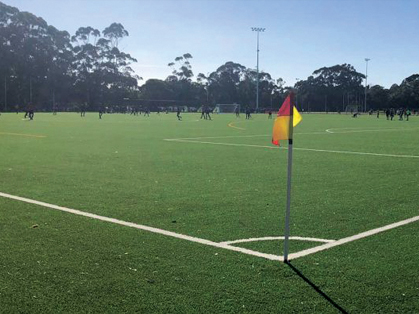 All funding has been cut from Northern Beaches Council's synthetic sportsground conversion.

Northern Beaches Council has been forced to put several infrastructure projects on hold, as it grapples with $12.4m in revenue losses due to COVID-19.

According to the budget adopted in late June, these losses together with the community support funding packages provided during COVID-19 will likely set Council back $21m.

$5.7m of the losses is projected to come from closed and impacted services, including car parks, aquatic centres, community centres, and other assets such as Glen Street Theatre and Lakeside Holiday Park.

To partially mitigate the impact of this drop in revenue, Council has agreed to reduce its infrastructure spending by $6.3m over this financial year.

Notable areas that have seen a reduction in funding include the Northern Beaches Bike Plan, which seeks to improve the area’s cycling network, along with childcare centres and library building works.

All funding has also been cut from the synthetic sportsground conversion in 2020/21, with the project to be delayed a year.

Spending on plants, equipment and stormwater assets has also taken a hit.

A Council spokesperson has told Peninsula Living upgrades to critical assets which, if left, could pose a safety risk, were prioritised for funding, along with any works where a financial commitment has already been made to a contractor or consultant.

“Some reductions were made to the capital works budget to allow an extension of time for community consultation and provide Council with the capacity to respond to COVID-19,” says Northern Beaches Mayor Michael Regan.

“The projects deferred represent the equivalent of nine weeks of capital expenditure.

“[Overall], Council’s revised capital works program is a significant investment in the community and supports the local economy as it recovers from the pandemic.”

Empower young women
Assist local girls and young women to become confident, self-respecting, and responsible...
Councillor calls time on Cabbage Tree boaters
Councillor Candy Bingham is urging Northern Beaches Council to ask the State Government to...
Passion for peddling
A well-known Cammeray personality pioneered long-distance cycling on the North Shore...
Be the purrfect companion
Calm, gentle, and loving pets are needed to visit frail aged and vulnerable locals living...
The crime report: Pittwater
Get the lowdown on the recent incidents reported near you...