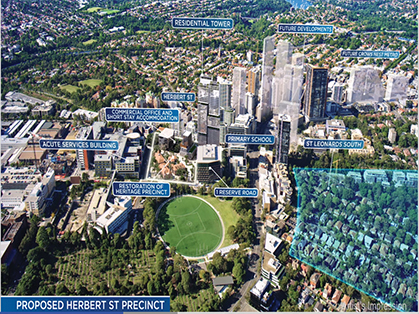 State Government plans to redevelop 2.27 hectares of land within the Royal North Shore Hospital (RNSH) site have been met with concern by a senior clinician, who says the land was earmarked for ‘much-needed’ outpatient and clinical support services.

Announced just over a year ago, the NSW Government’s planned Herbert Street Precinct would see a section of land at the southern end of the hospital campus transformed into a new ‘health precinct’.

Concept plans include a 45-storey tower with 500 residential apartments leased by the government, 75 per cent of which will be for frontline workers and the remaining 25 per cent ‘built to rent’.

There will also be a medi-hotel, that the government says will assist in accommodating public hospital patients, respite care, carers and visiting clinicians.

A significant portion of the development will be health-related commercial offices, such as medical suites and consulting rooms, while there are also plans for a 750-student primary school and retail space that may include a gym and childcare.

The project is proposed for land within Zone 8 and Zone 2 of the masterplan, which were allocated to outpatient services, staff and on-call accommodation, respite care, carer accommodation, childcare, a medi-hotel, family services and a small amount of commercial retail and carparking.

“It looks as though from their plans, the hospital will be getting just five per cent of the floor space from the development,” Dr Cooper says.

“The critical thing is, if we lose that land, then there’s more land being lost with the Ministry of Health and the Herbert Street Precinct compared to the land that we actually have left on the campus to redevelop.

“The Herbert Street Precinct with the Ministry of Health will take up 19,500 square metres and the land that we’ll have left to develop for the entire campus will be 16,000sqm.”

He says should the precinct go ahead, the only land that will be available for redevelopment will be the site of the former Brown Building, which has been designated for ‘critical’ green space.

According to Dr Cooper, this inability to expand or redevelop could significantly hinder the capacity of the hospital to cater for the North Shore’s forecast growth and provide up-to-date care and services into the future.

“Generally, all hospitals need to be rebuilt every 30 or 40 years. To be able to do that, you’ve got to have empty space that you can build on while you’ve still got a functional hospital. Then, as soon as the new hospital is built, you can transfer the patients from one to the other,” he explains.

“You can’t knock down the existing hospital and take three years to build a new hospital before bringing everyone back. You won’t have a hospital left any more. So, the services and infrastructure will become fuller and fuller and older and older.

“With current figures, I think we’re the second busiest emergency department in the state. You only have to look out the window to see all the development and the growth is going to be a significant issue,” he adds.

“If we can’t increase our bed base, access to the hospital over time will become gridlocked. We’re going to have patients stuck in trolleys in the emergency department.

“Basically, what they will do will strangle the ability of the hospital to grow into the future.”

A Northern Sydney Local Health District (NSLHD) spokesperson told North Shore Living while the NSW Department of Planning (DPIE) has advised the plans are concepts only at this stage, the proposed development offers ‘additions to the RNSH campus above and beyond earlier campus plans’.

“NSLHD is fully aware that all proposed developments on or involving the RNSH campus must be evaluated against the present and future needs of RNSH, its patients, staff and the community that it serves,” they said.

“RNSH management has been working with hospital staff and NSLHD to identify and prioritise other potential uses of the Herbert Street Precinct development that would complement and enhance clinical services for the community and improve the amenity of the entire campus.”

According to the representative, the land being considered for the Herbert Street Precinct is not owned by the hospital, with RNSH having ‘substantial land on the campus to expand its current range of health services and cater for future growth and development.’

“There is currently a parcel of land at RNSH which has been earmarked for expansion of clinical services. This land would allow for the current RNSH Acute Services and Clinical Services buildings currently at RNSH to be replicated,” they state.

“There are also further expansion opportunities with the Douglas Building and parcels of land at the northern end of Herbert Street that belong to RNSH.”

A statutory consultation period will be facilitated by the DPIE in late-2021 as part of the design and planning assessment process, once the plans are finalised.

If approved, construction is expected by completed by 2025.

Councillor resigns
Former Naremburn Ward councillor Stuart Coppock has resigned from Willoughby City Council...
Locals tell on 'tossers'
Northern Beaches residents have ranked fourth in the state for reporting the largest number...
Full refurb for Cremorne courts
The tennis courts at Primrose Park will receive a full refurbishment, with the Federal...
Business help
Northern Beaches Council is expected to extend its waiving of all outdoor dining and...
Boarding house boom
Two new boarding house developments have been proposed for the south of the Peninsula, one...