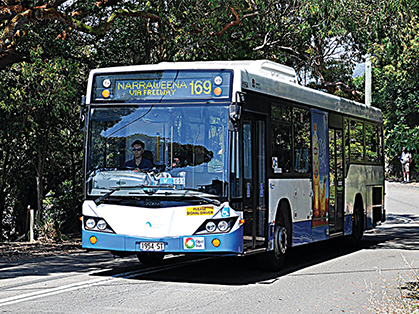 In early October, Transport for NSW (TfNSW) announced a streamlining of the local bus network, with 2,000 extra weekly services on the cards and the addition of new frequent routes.

On the Northern Beaches, this means an upgrade to route 160X Dee Why to Chatswood to operate every 10 minutes across the day, and a new frequent 144 Manly to Chatswood via St Leonards service to replace the current 143 and 144.

The overhaul also included the cancellation of some routes, notably a few direct City and Warringah Mall services, which has caused concern among local commuters.

For Fairlight, Balgowlah Heights and Clontarf residents, the route 170 Manly to the City will be scrapped.

Locals will now have to take new 144 service to Spit Junction and transfer to the B-Line.

The 169 Manly via Narraweena to the City and the 173 Narraweena to Milsons Point will also be cut, with commuters to the CBD now required to change at Seaforth, and those travelling to North Sydney told to head to Dee Why and transfer for the 154X.

Residents visiting Warringah Mall will also be impacted, with the 132 Manly to Warringah Mall via North Balgowlah axed and residents forced to swap at Seaforth for the 162 to Manly or the 172X to the Mall.

This means for Balgowlah Heights locals, there will be no direct service to the Westfield.

Passengers of the 178/178X Cromer Heights and the 179X Wheeler Heights City services will need to change at the B-Line in Dee Why for an express to the City, while the 166X Allambie Heights to Wynyard will be culled.

The 168/168X Milsons Point services will also be canned, with commuters required to change at either Manly Vale or Spit Junction.

According to TfNSW, the changes have been made based off Opal card trip data collected both before and during the COVID-19 outbreak, together with forecasted future growth patterns.

It says that despite some customers now needing to transfer to multiple services to reach their destination, the changes will improve service levels, minimising wait times so that most journey times will be comparable with current trips.

However, locals, Northern Beaches Council, and the bus union have cast doubt on this modelling, maintaining many of the slashed services were heavily frequented pre-pandemic.

“Opal data is indicative only,” says tram and bus division secretary of the Rail, Tram and Bus Union, David Babineau.

“There are a lot of people that don’t tap on, school kids in particular, and bus drivers are not encouraged to challenge for fares.

“What should really be happening is that [data] should be the beginning of a more thorough investigation as to the usage of the service.”

Seaforth resident Megan Lusk told Peninsula Living both the 173 to North Sydney and the 169 to the City were frequented by workers and local high school students before COVID hit.

Her children currently take the 173 to school in North Sydney, while she and her husband head to work on the 169, and she says the changes will likely influence her to drive instead.

“I have one about to start Year 7 in North Sydney next year. I don’t want to worry while I’m at work that he’s made it to school safely because he’s had to change buses multiple times,” she says.

“The whole thing seems like a knee-jerk reaction without much thought put into it.”

Balgowlah Heights local Amanda McNally says 132 services to Warringah Mall and to Manly are frequently used by school students and the elderly, who will likely struggle to change buses at Seaforth.

In mid-October, several online petitions began circulating on social media calling on the State Government to stop the cancellation of the services.

Mayor Michael Regan says the reaction points to a lack of community consultation, confirming Council was not spoken to prior to the changes.

“If we were, we would have flagged the obvious concerns and asked for the data to support the cancelling,” he tells Peninsula Living.

With the network set to be franchised by the final quarter of 2021, Mr Babineau says the changes reflect the government’s desire to make the network financially profitable before turning it over to a private operator.

Befriend a Veteran
CCNB is looking for kind, friendly locals to provide social support to war veterans in the...
Assist Native Wildlife
Support the incredible work local service Sydney Wildlife do to rescue and rehabilitate...
A home for healing
An innovative housing initiative on the lower North Shore is shedding light on the...
The love bug
One of Mosman’s most beloved couples talk about their devotion to love, family and...
We need to talk about menstruation. Period
Dee Why’s Dean and Nina Tavener are dedicated to breaking down the stigma around...