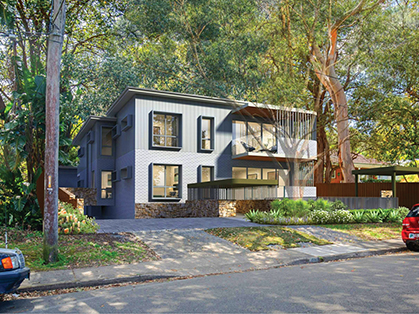 Residents have rejected a proposal to build six seniors’ living units on a residential street in Newport, citing concerns for the impact on amenity, privacy, traffic, and the local environment.

The two, two-storey dwellings would feature six two to three-bedroom apartments, each with open plan kitchen, dining and living areas and private balconies or open space.

There would also be a common outdoor open space between the two buildings, and a basement level carpark with eight parking spaces and storage.

The development would be the fifth over 55’s development on the local road, with residents already claiming traffic congestion issues.

In several submissions on the Council website, neighbours have expressed concern at the safety implications of increasing traffic, considering the community kindergarten is located on the street.

Many say the proposal, which breaches floor space ratio controls by close by 13.8 per cent, signifies medium-density development in a low-density area.

“We are setting a precedent that every block of land that is just a little larger than usual can be purchased purely for the purpose of a property development as a profitable business venture,” says resident Paul Harrison.

As such, there are concerns over the impacts to neighbours’ privacy, solar access, and the local amenity, including the environment.

The proposal outlines the removal of four trees classified as ‘high significance’ in the arborist’s report, with residents claiming the site has previously been a habitat for native species, including the powerful owl.

“The shameful act of removing these beautiful trees is beyond believe,” says local Roger Russell.

“The whole project has no regard for site coverage, or the area amenity, or the folk who live there...”

In the proposal’s statement of environmental effects, it states the detached building form of the development reflects the neighbourhoods predominantly low-density dwellings.

“We have formed the opinion that the development will not give rise to any unacceptable environmental, streetscape or residential amenity impacts,” the report says.

Befriend a Veteran
CCNB is looking for kind, friendly locals to provide social support to war veterans in the...
Assist Native Wildlife
Support the incredible work local service Sydney Wildlife do to rescue and rehabilitate...
Top 5 interstate holiday spots
Australia’s state borders are reopening, and now is the time to do your part in boosting...
The Aussie cossie
For the first Harbour people and the early European settlers, the only bathing suit was the...
Volunteering across Pittwater
Eager to give back to your community? Check out these great opportunities to volunteer in...