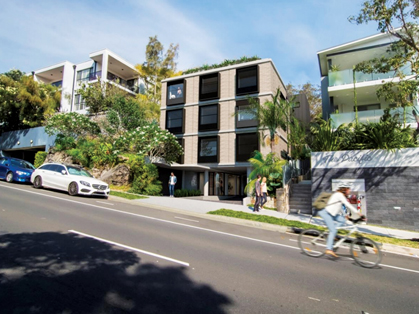 A concept design of a proposed boarding house development at 67 Pacific Parade, Dee Why.

A proposal to build a boarding house on Dee Why’s Pacific Parade has caused outrage among locals, with residents calling the plans ‘entirely unsuitable’ for the area.

The $4.5 million proposed development would see the current single-storey house at 67 Pacific Parade, Dee Why, demolished to make way for a five-storey ‘new generation co-living’ boarding house with 25 rooms and up to 50 residents.

Each room would be fully furnished with private kitchen and bathroom facilities.

There would also be room for a live-in site manager, along with a communal laundry, common rooms, an outdoor rooftop terrace and underground parking for 13 cars.

A report filed on behalf of the applicant says the owner is ‘motivated by the identified housing affordability crisis on the Northern Beaches’, with rooms to cost between $500 - $525 per week including insurance, utilities and Internet.

The proposal has already attracted more than 50 objections from locals over concerns it signifies overdevelopment of the less than 700m2 site.

Residents say they are concerned over the impacts on privacy and noise pollution from the proposed rooftop terrace, while the lack of on-site parking will increase congestion issues along the Dee Why thoroughfare.

There are also fears planned excavation work could cause damage to surrounding properties, with the assigned Northern Beaches Council officer saying the proposed 3.5-storeys underground are ‘a concern on a narrow site.’

“We are not against providing accommodation for disadvantaged persons but given all the practical considerations we don’t believe that the location of this boarding house is suitable for this locality,” neighbours Denis and Lynne Smith said.

“The development is in the public interest.”

Empower young women
Assist local girls and young women to become confident, self-respecting, and responsible...
Grow a local writing community
Spill the Beans Inc is developing a community of budding and published writers who address...
Mozzies numbers soar
Pittwater mosquito populations have been booming since late January, following a wet and...
Scomo visits Collaroy surf club
Prime Minister Scott Morrison announced $9.7 million in funding for Surf Life Saving...
Step up to Clean Up the Northern Beaches!
Too many of us take for granted the beautiful Northern Beaches, so this month let’s do...