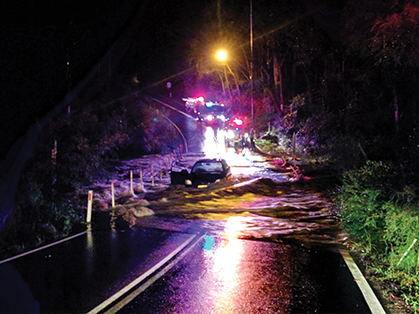 The regular closure of Wakehurst Parkway may soon be a problem of the past, with Northern Beaches Council releasing a study into flood mitigation options.

The study is being released following confirmation from the NSW Government of $18.1 million in funding towards reducing the flooding that regularly chokes the road.

Currently, the arterial road closes five times a year due to flooding.

Council’s preferred floodproofing measures would mean the Parkway would close on average once every two years.

While the report outlines several approaches to reducing flooding, Council says the ‘best outcome’ would come from a combination of works costing $17.5 million.

This option would reduce flooding at three key sites – Oxford Falls Grammar, The Bends and the Sydney Academy of Sport and Recreation.

At The Bends, it would involve constructing a new levee; removing one metre of overbank sediment, including vegetation; installing culverts under the road and topping up the existing northern levee.

Two existing road pipe crossings under the road at Oxford Falls Grammar would be expanded to increase the flow of flood water and contain it within the channel.

Two bunds would also be built adjacent to the Sydney Academy of Sport and Recreation to restrict overland flow of water across the low point of the Parkway.

While full or partial road closures would be needed during construction, Council anticipates two lanes of traffic could be maintained at a reduced speed limit.

As such, he says Council will not pursue the project unless it is supported by the community.

“The road runs through the middle of a sensitive, rich ecosystem supporting an array of threatened plants and animal species, and there are no options that fix the wider flooding problem without environmental impacts,” he says.

“We are right at the beginning of the process – commissioning this feasibility study was the first step in order to get a sense of the options available.

“We have a lot more work to do to make sure we have a full and extensive picture of what flood mitigation measures will mean for the sensitive environment.”

The flood mitigation feasibility study outlining multiple potential measures to deal with the issue will be available for community input in May.

Empower young women
Assist local girls and young women to become confident, self-respecting, and responsible...
Castle on the hill
Delmar’s new multi-million-dollar wing in Dee Why has opened to Northern Beaches patients.
Battle for Military Road rages on
The Neutral Bay community and North Sydney Council are at loggerheads over a planning study...
‘Gender bias in the extreme’
Plans to upgrade Willoughby Leisure Centre have been condemned by the Northern Suburbs...
Councils concerned by Beaches Link
North Sydney and Willoughby City councils have produced extensive submissions on the...