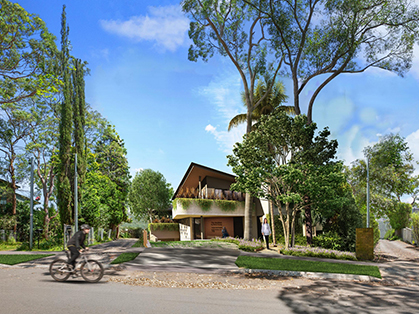 The four-year saga regarding plans to build a boarding house near the new Northern Beaches Hospital continues, with the developer lodging an appeal in the Land and Environment Court.

The resubmitted plans have seen the proposed number of rooms decrease from 82 to 55 and a reduction in gross floor area by around 3m2, but the four buildings remain.

The controversial rooftop terrace along with the entire proposed third level have been scrapped, reducing the height across the site to under the 8.5 metre limit.

The front and rear setbacks have been increased, moving the building further away from retained trees, while increased separation between the four buildings has allowed for improved landscaping and greenery.

The plans also include additional off-street parking for residents and a new 1.5m concrete footpath connecting the site to Frenchs Forest Road.

In its determination, the panel said the proposed design was ‘not compatible with the character of the local area’ and that the site was ‘not suitable’ for such development.

It also said the landscaping, front setback, off-street parking, privacy and bulk and scale were not suitable and that the proposed development was ‘not in the public interest’.

The reduction in bulk and scale has failed to reassure residents, with more than 20 objections already submitted to Council ahead of the hearing.

Concerns regarding the impact on traffic, pedestrian safety, privacy, and noise pollution remain, with many maintaining the proposal is still out of character for the area.

In a statement prepared by the architects on behalf of the developer, it is argued the build is in line with other residential dwellings in the area and would be a “visually exciting, yet respectful addition to the area.”

“The development will provide great amenity for residents and convenient accommodation for key workers of the newly opened Northern Beaches Hospital,” the architect states.

Befriend a Veteran
CCNB is looking for kind, friendly locals to provide social support to war veterans in the...
Assist Native Wildlife
Support the incredible work local service Sydney Wildlife do to rescue and rehabilitate...
The love bug
One of Mosman’s most beloved couples talk about their devotion to love, family and...
We need to talk about menstruation. Period
Dee Why’s Dean and Nina Tavener are dedicated to breaking down the stigma around...
Art prize pushes boundaries
There were a number of firsts in the 2020 edition of the Ravenswood Art Prize, including a...