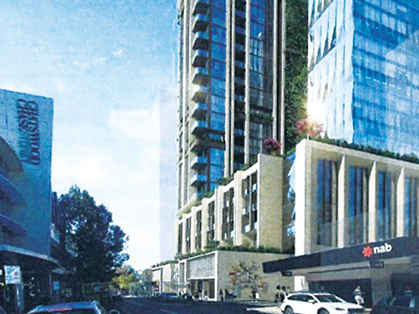 A visualisation of a proposed 20-storey development on Victoria Avenue.

Willoughby City Council has rejected plans for a 90-metre mixed-use development on Victoria Avenue, directly across from Chatswood Chase.

At its February meeting, Council voted not to endorse a planning proposal that would see 282 – 284 Victoria Avenue rezoned to accommodate a 20-storey building with ground-floor retail, six floors of commercial tenancies and 13 floors of apartments.

The current eight-storey commercial building on the site would be knocked down to make way for the $79.5 million development, which would also include a three-level basement carpark.

Council refused to recommend the proposal to the Department of Planning, Industry and the Environment (DPIE) for a gateway determination on the basis that it was “inconsistent” with local planning regulations.

In their report, officers said the proposal is a ‘departure’ from the Council’s Chatswood CBD Planning and Urban Design Strategy 2036, which dictates the site should be predominantly used for retail or commercial purposes.

There were also concerns over the proposed height of the building, which would soar 83 metres above the current seven-metre limit.

Both the project planner and the architect addressed the meeting, calling for councillors to defer a judgement on the proposal until the applicant could ‘fully review’ the officers’ feedback and make amendments.

However, officers said the plans would need a ‘substantial rework’ and that the proponent had several meetings with staff throughout the assessment process at which Council’s views were ‘made clear’.

In the proposal, filed on behalf of the applicant, it argues the development is ‘generally consistent’ with planning regulations, providing up to 278 jobs.

It also states the build would ‘contribute to the urban renewal of Chatswood’ and provide additional affordable housing options to older residents and young singles and couples.

Empower young women
Assist local girls and young women to become confident, self-respecting, and responsible...
Making the right calls
Whether its Kasey smashing the glass ceiling or Gavin fighting for the prevention child...
Construction set for Harbour tunnel
In a major step for the NSW Government’s Western Harbour Tunnel and Warringah Freeway...
The Red Cross needs you!
Contribute your skills to raise money for the vital everyday work of the Red Cross in...
COVID-safe welcomer needed!
Locals are needed to welcome visitors and staff to the Cerebral Palsy Alliance’s Allambie...