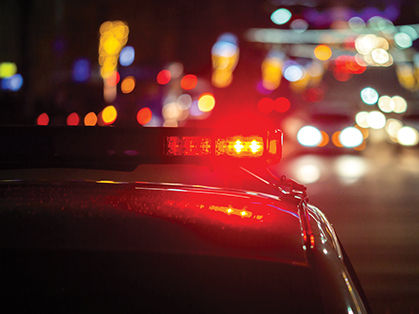 Five teenagers were arrested in June after a pursuit in a Land Rover allegedly stolen from Northbridge.

Just before 1am on Monday 14 June, police were checking vehicle speeds on the M2 Motorway at Baulkham Hills when a Land Rover Discovery was detected speeding.

Officers attempted to stop the vehicle shortly after, however it failed to stop, and a pursuit was initiated.

Police followed the car along the M2 as it took the Lane Cove Road exit and travelled through North Ryde, Lane Cove and Gordon.

Road spikes were deployed on Mona Vale Road, St Ives, with the car eventually coming to a stop on Palm Street before the occupants fled.

Two boys aged 17 and 16 and a further three aged 15 were arrested after a short foot pursuit and taken to Hornsby Police Station.

Checks revealed the Land Rover was allegedly stolen following a break-in at a Northbridge home on Friday 11 June.

The 17-year-old driver was charged with police pursuit, not stopping [and] driving dangerously; driving recklessly/furiously or speeding/in a dangerous manner; never licensed person driving a vehicle on road; taking and driving conveyance without the consent of the owner; and breaching bail.

Meanwhile, the 16-year-old and three 15-year-old passengers were charged with carried in conveyance taken without consent of owner.

The older passenger was also charged with breach of bail.

All appeared at the children’s court in June and July.

A Carlingford man has been charged over an armed robbery in Chatswood and a stabbing in Manly in early June.

Police allege the 29-year-old entered the Glue clothing store in Westfield Chatswood at about 1pm on Friday 11 June.

While there, he allegedly stole a blue Ralph Lauren cap and a dark-coloured Ellesse jacket while armed with a ‘small, silver knife’.

After the man left the store, he was approached by a male staff member before allegedly threatening the employee with a knife. He then fled and police were contacted.

Later that day at around 3.40pm, emergency services were called to Raglan Street, Manly, following reports a man had been stabbed by a person unknown to him.

The 43-year-old victim was treated at the scene before being taken to Northern Beaches Hospital where he underwent surgery.

Following inquiries and an investigation into the circumstances surrounding the incident, detectives attended Royal North Shore Hospital on Monday 14 June where they spoke to the Carlingford man.

He was charged with robbery while armed with an offensive weapon and wounding a person with intent to cause grievous bodily harm.

His lawyer did not apply for bail on his behalf, with the case adjourned for two weeks, so the man did not have to appear before the magistrate via video link from his hospital bed.

Three teenagers were arrested in early June following a multi-vehicle crash and the alleged assault of a police officer.

Around 12.20am on Saturday 5 June, police saw a blue 2015 Mazda CX-5 station wagon make an illegal turn from Willoughby Road on to the Pacific Highway at Crows Nest.

Officers turned on their warning lights to speak with the driver, before the Mazda allegedly veered sharply across two lanes, colliding with a taxi before crashing into two parked cars.

All vehicles sustained significant damage; however, the taxi driver was not hurt.

Police were speaking to the occupants of the vehicle when it is alleged the 16-year-old male driver assaulted an officer by punching him in the head and headbutting him.

Three young people, two 17-year-old girls and the driver, were arrested at the scene and taken to Chatswood Police Station.

Further inquiries found the car had been stolen the previous day from a Lindfield address.

The boy was charged with two counts of assault on a police officer in execution of duty; taking and driving conveyance without consent of owner; unlicensed for class (class C, R, LR, or MR) first offence; and disobeying a no right turn sign in motor vehicle.

He was refused bail and appeared at the Parramatta Children’s Court on Sunday 6 June.

One of the 17-year-old girls was charged with being carried in conveyance taken without consent of owner and breaching bail conditions.

She was refused bail and appeared at the Parramatta Children’s Court the following day.

The other was also charged with being carried in conveyance taken without consent of owner.

She was given conditional bail and appeared at the Surry Hills Children’s Court on Tuesday 13 July.

Mosman milestone
Mosman Council has marked a significant milestone with its fast electric vehicle charger in...
WIRES wildlife calendar
Local not-for-profit WIRES are excited to announce their annual wildlife calendar is now...
North Sydney Wharf upgrade
Work on a new and improved North Sydney Wharf began in late December...
The crime report: Northern Beaches
Get the lowdown on the recent incidents reported near you...
North Shore sees net zero on the horizon
Climate change is something the whole world is tackling; however, the impacts can be felt...