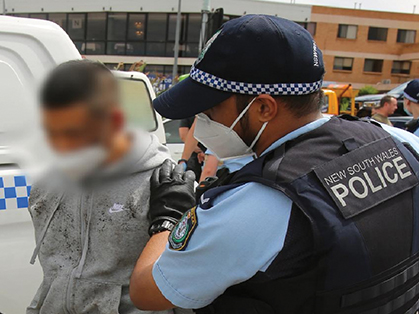 A 56-year-old pedestrian was seriously injured after he was struck by a vehicle in Northbridge in late October.

Emergency services were called to the intersection of Sailors Bay Road and Blight Street following reports of an incident involving a pedestrian and a vehicle.

The pedestrian was treated by paramedics at the scene before being taken to Royal North Shore Hospital (RNSH) in a serious but stable condition.

The driver of the vehicle, a 65-year-old man, sustained no injuries and was taken to RNSH for mandatory testing.

Police are appealing for any relevant information from the public, such as dashcam footage or witness accounts.

A learner motorcycle rider has copped an eye-watering $77,000 in fines after police assessed footage from a video camera attached to his helmet.

The 23-year-old male was initially pulled over after he was allegedly seen by police travelling 162 kilometres per hour in an 80km/hr zone on the Warringah Freeway at North Sydney.

Officers then noticed the rider was equipped with a GoPro-like camera. Analysis of the camera’s memory card showed numerous examples of dangerous driving, including travelling in excess of 200km/hr.

“The offences included [driving] on the incorrect side of the road, in breakdown lanes and bicycle lanes, often in heavy traffic,” a statement from NSW Police said.

The rider’s licence was immediately suspended, and he was due to face court in mid-November.

Five men have been arrested after allegedly kidnapping a 20-year-old at a Greenwich park in broad daylight.

The young man was allegedly forced into a car by the men and driven to an unknown location.

He claims he was threatened, assaulted and then released.

Five men have subsequently been arrested, four men aged between 27-33 at a service station in West Ryde and a 24-year-old man at Macquarie Park.

Police detained various items from the 24-year-old, including tasers and cash.

He was then charged with five offences, including taking/detaining a person in company with intent to obtain advantage, possession of an offensive weapon, drug supply, and knowingly dealing with proceeds of crime.

The other men were each charged with taking/detaining a person in company with intent to obtain advantage (conspiracy to commit an office).

Four men were refused bail and are expected to appear at court. The fifth man was taken to Westmead Hospital after a dog bite and remains under police guard.

‘Beyond breaking point’
North Shore nurses and midwives have been pushing for a better nurse-to-patient ratio and...
MP weighs in on Avalon land closure
Member for Pittwater Rob Stokes has urged Northern Beaches Council not to proceed with the...
Mona Vale, have your say!
As part of the development of the Mona Vale Place Plan, Northern Beaches Council is urging...
Clifton Gardens clean up
Fifty volunteers recently teamed up to conduct a clean-up of Clifton Gardens and Chowder...
The crime report: Northern Beaches
Get the lowdown on the recent incidents reported near you...