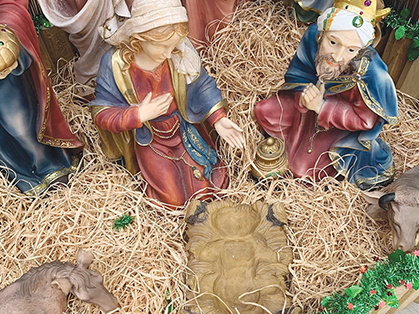 Just before Christmas, a prop of baby Jesus was stolen from a Christmas nativity display at Bridgepoint Shopping Centre in Mosman.

Centre staff were shocked to discover the late-night theft when they came in to work one morning, finding not only the baby Jesus missing from his position in the crib, but also that a sheep had been taken from the display.

CCTV footage from the centre was handed to police to aid their investigation into the incident.

The nativity display has been a central part of Bridgepoint’s festive celebrations for over a decade.

A man has been charged after he allegedly assaulted a 16-year-old girl on the Lower North Shore on 7 December.

The girl was orienteering in Lane Cove National Park at Thornleigh when she was allegedly grabbed on the arm and throat by an unknown man.

As a result of the alleged assault, she was rendered unconscious. A short time later, she was found by runners passing by and was then taken to Royal North Shore Hospital where she was treated.

The man appeared at Parramatta Local Court on the same day of the arrest, where he was refused bail on 23 December.

Lower North Shore locals have been warned to stay on alert following a spate of thefts from cars in the area.

NSW Police recommends locking your car, including doors, windows and sunroofs, every time you leave, parking in well-lit areas and taking your valuables with you to avoid theft.

If you have been the victim of car theft, report the crime to the NSW Police Assistance Line on 131 444.

Beaches Link put on ice?
State reviews major infrastructure projects...
Another tower for North Sydney
A development application (DA) has recently been submitted to North Sydney Council for...
Celebrating 100 years of Avalon Beach
Peninsula Living is exploring some of Avalon Beach’s incredible history in celebration of...
Taronga reptiles find a new home
A new purpose-built amphibian and reptile conservation centre at Mosman’s Taronga Zoo has...
The crime report: North Shore
Get the lowdown on the recent incidents reported near you...