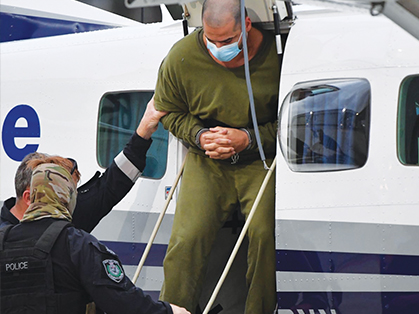 Police arrested a Bayview man on 10 November, after a two-week search where he fled from police and breached his bail conditions.

The 33-year-old was granted bail on 22 October after he was originally arrested over allegedly being part of a conspiracy to import more than 900 kilograms of cocaine into Australia.

Mostafa Baluch breached bail by cutting off his monitoring anklet and was last known to have been on Pittwater Road, Bayview, just before 10.30pm on 25 October.

Queensland Police stopped a truck which was crossing the border from New South Wales on 10 November and discovered Mr Baluch hiding in a car inside the truck.

After a court hearing in mid-November, he remains behind bars and has been charged with drug offences relating to a 900kg shipment of cocaine and, additionally, charged over breaching his bail.

A Mona Vale motorbike mailman has been charged after allegedly throwing his scheduled delivery load into his own bin and claiming the money for ‘delivering’ them.

As well as his regular postal items, he had also agreed to work overtime which consisted in delivering rental and advertising brochures to homes on the Northern Beaches.

The postie was claiming he was working for 11 hours per day, a Sydney court was told.

The 64-year-old veteran, who was employed by Australia Post, pleaded guilty in early November to one count of dishonestly take/conceal mail.

The court heard in early November the man’s housemate reported him to Australia Post, as he claims there were various advertisement leaflets filling the bins at their shared home.

The man has subsequently been sacked from Australia Post.

The court’s magistrate said the offences were at the ‘lower end of the scale’ due to the material being advertisement and not personal postage.

The man was found guilty, but the conviction was not recorded. He has been placed on a 12-month good behaviour bond.

A 64-year-old Yugoslavian-born Avalon handyman is facing deportation after handing himself in to police.

Darko Desic escaped from jail 30 years ago after being arrested for supplying marijuana.

He broke out of Grafton jail in 1992 using a hacksaw and bolt cutters to avoid being returned to Yugoslavia, where he fled to ¬escape military service.

Mr Desic spent 30 years residing in Avalon, working as a handyman and reinventing himself as “Dougie”.

After becoming homeless, he turned himself into Dee Why police station in mid-September this year.

Mr Desic pleaded guilty to escaping from lawful custody and has been sentenced to two additional months jail time for the offence.

He now faces deportation due to the offence and is pleading to stay in the country as he has spent more than half of his life in Sydney.

Paul McGirr, Mr Desic’s lawyer, said he had written to the Attorney-General and the Governor-General seeking clemency for his client.

Council converts to 100 per cent renewables
Willoughby City Council has opted for 100 per cent renewable energy under a new agreement...
New life for surf clubs
The redevelopments of the surf clubs at Long Reef and Mona Vale are almost finished...
‘Very close to residents’ hearts’
Pittwater councillors call for Mona Vale acute services...
Beaches Link put on ice?
State reviews major infrastructure projects...
The crime report: North Shore
Get the lowdown on the recent incidents reported near you...