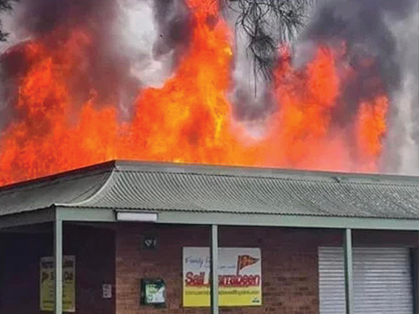 On Saturday 27 November emergency services were called to The Esplanade, Narrabeen, following reports of a fire.

NSW Fire and Rescue brought the blaze under control, however the building sustained significant structural damage.

The fire at Narrabeen Lakes Sailing Club destroyed the roof along with sailing boats, paddle boards and kayaks.

There were no reports of injuries.

A crime scene was established and as inquiries continue, police are appealing for anyone who may have information to contact Northern Beaches Police on 9971 3399.

Scammers tend to be disguised as well-known reputable companies to increase the chance of deceiving the recipient.

Scam phone calls will often show up as an unknown number or an overseas number.

However, call ‘spoofing’ allows the number to appear legitimate and recognisable so that people are more likely to pick up.

If a call isn’t answered, sometimes a text is then sent through with a link to listen to the Voicemail. It is strongly advised not to click on this link.

People who have received a scam can report it to Scamwatch. Victims of scammers who have lost personal information can contact IDCARE.

Northern Beaches detectives are investigating a smear campaign targeted at a candidate in the recent Council elections.

Flyers claiming Georgia Ryburn, who ran for the Liberal Party, was picked for the candidacy an intimate relationship with State MP for Manly, James Griffin, were distributed to letterboxes in Manly, Clontarf and Balgowlah.

Ms Ryburn, who is a new mother, and Mr Griffin both labelled the accusation as “defamatory” and “disgusting”.

“It’s so vital that we have women being representatives within all levels of politics,” Ms Ryburn said.

“It’s important for me to have women representing women on Council and these setbacks are disheartening.”

Councillor Candy Bingham has also been dragged into the affair, with the flyers claimed they were produced by her Good for Manly team.

Ms Bingham has categorically denied any involvement from her office.

There is no suggestion that the Good for Manly team has any involvement with the production of the flyers.

The crime report: North Shore
Get the lowdown on the recent incidents reported near you...
‘It was a case of people power’
Cremorne homes receive heritage protection...
Celebrating 100 years of Avalon Beach
Peninsula Living is exploring some of Avalon Beach’s incredible history in celebration of...
Taronga reptiles find a new home
A new purpose-built amphibian and reptile conservation centre at Mosman’s Taronga Zoo has...
Welcome back to Stony Range
Volunteers of Stony Range Regional Botanic Gardens are excited to be welcoming visitors...