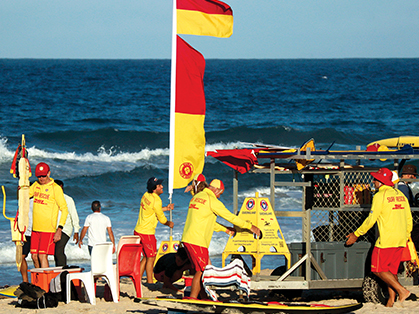 The NSW Government and local surf life saving clubs are pushing for greater community awareness of beach safety, following an increase in the number of drowning this summer.

Between 1 December 2021 and 22 January 2022, there were 15 coastal deaths and drownings across the state, including three rock fishermen.

In Pittwater alone, surf life savers responded to near drowning events at Newport Beach and North Palm Beach in December and January.

While both the men involved survived and were transported to hospital, tragedy struck with the death of a rock fisherman at nearby Turimetta Beach on New Year’s Day.

Captain of Newport Surf Life Saving Club (SLSC), Jess Menzies, says there was a ‘definite increase’ in people getting into trouble in the water during the summer period.

“I think there's a big combination of things happening. I think with COVID, there are more people trying to get outside and do something different,” she explains.

“The surf conditions have also had quite a few days with large surf, beaches being closed, tsunami warnings and that kind of thing.

“And people coming from out of area that may not necessarily know the risks and know how to be able to read the surf conditions.”

With international and state border closures leading people to holiday closer to home, authorities are concerned inexperienced swimmers, surfers and fishermen are placing themselves in situations outside their capabilities.

John Dulieu, president of Warriewood SLSC, says he has observed more incidents of risky behaviour, such as people not obeying signs, swimming outside the flags or not wearing a lifejacket when rock fishing.

“It just boils down to people not knowing their limitations and ignoring the warning signs,” he says.

“People look at the ocean and they go, ‘I can swim in that’. Then they get in it and, before you know it, they start swimming out and get caught in a crosscurrent or a small rip and they start to panic.”

With the state combatting a wave of the Omicron COVID-19 variant throughout summer, Jess says as incidents increased it also became difficult at times to adequately staff patrols.

This became a concern, as almost 2 million beach visits are paid to the Northern Beaches each year during standard times with that figure likely to have increased during the pandemic.

“Obviously, if anybody's sick, they can't come down to patrol. So, it really limits the amount of people that we have on the beach at a time,” she explains.

“Most of our patrols have gone from having quite a large number to being on the smaller side, just trying to keep our own patrolling members safe.

“It then also plays a factor when we go to do a rescue or administer first aid or CPR. We also have to think about keeping ourselves safe. So, there's also that little risk factor there as well.”

What needs to be done

According to Surf Life Saving statistics, 48 per cent of coastal drownings are of people born overseas.

John says this tragic statistic is transpiring on our beaches, and he would like to see more multilingual signage and beach safety initiatives working alongside multicultural communities.

“We’ve a very multicultural society, and there’s a fair bit of awareness that needs to take place. That’s got to be the target, in terms of making sure we’re reaching the broader population,” he says.

“There's got to be advertising, from possibly the State Government, in terms of 'swim between the flags' and 'wear lifejackets', because obviously it's just so important.”

Meanwhile, Jess says an increase in government funding is imperative to provide clubs with the technology and equipment to respond to drowning incidents.

Currently, most of the club’s funding comes from membership payments and fundraising efforts.

Fellow lifesaver and State MP for Pittwater, Rob Stokes, says while funding for such community programs and equipment is critical, the State Government has provided $6 million for capital improvements to Northern Beaches clubs.

“Government should deliver services but through these organisations, because they’ve got the connections to the community,” Mr Stokes said.

“It’s got to be community led and we provide a lot of funding for them to do that work.

“That’s why they’re so well-funded. At their heart, they’re a rescue and education body.”

John says while it’s been a ‘busy year for lifesavers’, he hopes increased community awareness will translate to less incidents next season.

“It’s always a challenge, and unfortunately it can take a drowning to emphasise the need for more awareness.”

Jess and John recommend the following actions to stay safe at the beach.

The crime report: Northern Beaches
Get the lowdown on the recent incidents reported near you...
Youth Awards announced
Mosman Council recently announced entries for two awards recognising the area’s young...
‘It was a case of people power’
Cremorne homes receive heritage protection...
Celebrating 100 years of Avalon Beach
Peninsula Living is exploring some of Avalon Beach’s incredible history in celebration of...
Taronga reptiles find a new home
A new purpose-built amphibian and reptile conservation centre at Mosman’s Taronga Zoo has...