Get your art on! 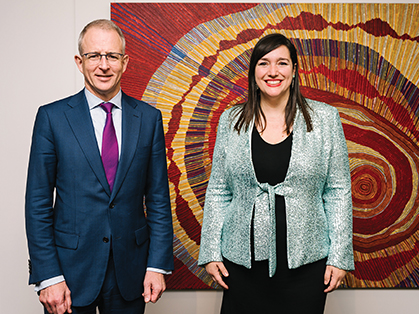 The Ravenswood Australian Women’s Art Prize is the highest value art prize for women artists in the country, and entries are now open.

Women are massively underrepresented in the Australian art industry, but Ravenswood School for Girls is on a mission to save that.

Male artists have long dominated prizes, gallery walls, arts press and leadership positions, despite evidence that in Australia, 75 per cent of art school graduates are female.

The Ravenswood Australian Women’s Art Prize is an initiative of Ravenswood School for Girls to advance art and provide opportunities for emerging and established women artists in Australia.

Shoufay Derz, from Forestville, was a finalist in the Professional Artist category in 2021 for her photographic artwork, In the Beginning, which was shot at South Curl Curl pool.

Shoufay initially took the shot looking down from above, but then swam laps in the pool while holding the film, “which changes the chemicals in the film and causes an a chemical reaction,” she says.

The artist has spent the last 18 months in Germany with a one-year residency at the Künstlerhaus Bethanien Berlin through the Australian Council for the Arts and said the thing she “missed the most was Curl Curl pool”.

Jessica Vincenza from Roseville was also a 2021 Emerging Artist Finalist with her impressive digital submission, While Away, My Home Lost Colour and Sound.

She tells North Shore Living she was inspired for her striking piece after arriving back to the bushfires in Australia after living in Spain, where she was studying her Masters in Film.

“Home is returning,” she says. “It is familiarity, safety and belonging, but when I came back, many of the places I’d spent my childhood and called ‘home’ were completely different.

“The colourful forests had lost their colour; the fields were bare; the trees black and silent, and you could hear a single bird’s tweet from miles away.

“I was trying to replicate that experience of the memories you have of home, which are so full of sounds and smells, to the juxtaposed position of the experience of coming home, and it’s not there anymore.

“I shot on 16mm film and experimented with in-camera shutter-rates and film developing techniques to emulate notions of memory, colour, sound, loss and silence.”

Another local finalist, Pamela Pauline from Mona Vale, also entered in the 2017, 2018 and 2020 Australian Women’s Art Prize. She was a 2021 Finalist in the Professional category for her fine art photographic collage, Hopeful Honeyeaters.

It forms part of her Fragile Beauty, Rich and Rare body of work, which won the 2021 National Trust Heritage Award for Exhibitions and was recently shown as part of the Head On Photographic Festival in Paddington.

“I really want to draw attention to the biodiversity crisis we’re facing here,” she says. “My work has become increasingly focused on Australia’s natural heritage, with a particular focus on its unique flora and fauna.

“This is a story that is seldom told, yet without our plants, nothing survives.”

“I am immensely proud to oversee this, our sixth annual prize and exhibition for women artists,” she says.

“At Ravenswood, we are passionate about empowering women and this generous art prize is a way for us to advance Australia’s talented women artists, providing them with greater career opportunities.

“This art prize will strengthen the profile and legitimacy of careers in art for current, as well as future, generations of Australian women.”

Due to the restrictions imposed by COVID-19 NSW Health regulations, the announcement of the 2021 winners was live streamed and the artworks could be viewed as a virtual tour online.

It was so enjoyed by artists across Australia and globally that Ravenswood will continue to incorporate the live stream of the opening and virtual tour of the exhibition in future art prizes.

Entries to the 2022 Ravenswood Australian Women’s Art Prize are now open and will close at 12.00pm AEST on Wednesday 23 February.

The Exhibition of Finalists will be open from 14 to 29 May, and the winners will be announced at the Opening Night on Friday 13 May.

Welcome back to Stony Range
Volunteers of Stony Range Regional Botanic Gardens are excited to be welcoming visitors...
Mona Vale hospital network boost
A new group of medical interns are set to commence their clinical training at Mona Vale...
Stay vouchers available
A $50 accommodation voucher is now available for locals as part of the Stay NSW program...
‘It’s just too high’
North Sydney rejects Crows Nest skyscraper...
The crime report: North Shore
Get the lowdown on the recent incidents reported near you...