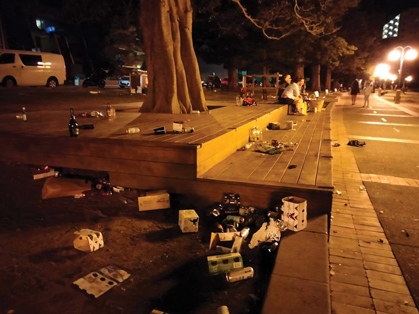 At the most recent meeting of Council, councillors spoke for over an hour on widespread accounts of disorderly behaviour and breaches of the COVID-19 Public Health Orders at the harbourside park, commonly known as ‘The Office’.

Following the NSW Government’s slight easing of coronavirus restrictions in late September, reports circulated on social media of weekend picnickers not wearing masks, gathering in large groups, not adhering to social distancing rules, and leaving behind mounds of rubbish.

Such footage prompted Liberal councillor Pat Daley to approach the issue at Council’s September meeting during a discussion about the adoption of a local Community Safety Plan.

Councillor Daley, who has previously been a proponent for banning alcohol at the reserve, said events at East Esplanade had been ‘deteriorating’ in recent times.

“The problem that we’ve got with East Esplanade is that there’s no responsible service of alcohol... It’s just a complete free-for-all and it’s basically a beer garden.”

“This is seen as party central,” Councillor Alex McTaggart added.

“The only way to address the issue and to empower police to move people on is to have this designated alcohol-free.”

Manly councillor Candy Bingham said she believed the behaviour was ‘a specific issue that happened on a specific day’ as restrictions eased.

“It’s unfortunate, it’s extremely unfortunate that the numbers [of people] were what they were, but I think it’s also a matter of circumstance,” she said.

After drawn out debate on the incident, Councillor Daley once again put forward that the reserve be made a 24-hour alcohol free and prohibited zone for a period of two years.

The move was backed by councillors McTaggart, De Luca, Ferguson, Sprott and Harrison, however failed to receive majority support.