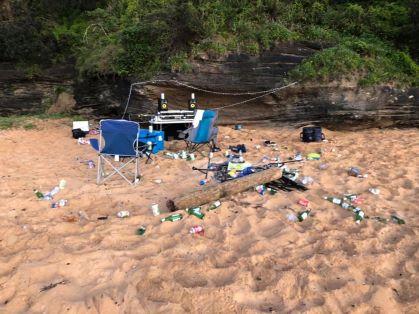 The news follows reports from locals over the past two weekends of rubbish strewn across local reserves and beaches, as Sydneysiders flood outdoors to enjoy the warmer weather.

This led to calls on social media for Council to increase rubbish pickups and the number of bins at popular spots, such as North Narrabeen rockpool, Narrabeen Beach and Turimetta Beach.

“This will be the norm as people explore their own backyard with COVID-19,” concurred fellow resident Rhonda Dew.

Council CEO Ray Brownlee said there was a 62 per cent increase in garbage at beaches and public places on the Northern Beaches over the long weekend, equating to an unprecedented 39 tonnes of rubbish.

He said while Council was prepared for the spike, distributing 44 more bins at key areas and scheduling 10 extra cleaning staff, it will increase emptying of bins to twice or three times a day in some locations over the summer.

“Going forward, we will continue these extra teams so people can enjoy the warmer months outdoors without the nuisance of backed-up litter spoiling our beaches and leisure spots,” he says.

“This strategy is aligned with extra hygiene practices businesses and individuals are being urged to undertake to keep COVID-safe.”

Extra cleaning staff will also be scheduled to work additional shifts from early morning until 8pm on peak summer days.