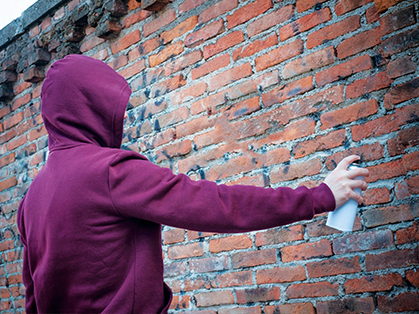 A Northern Beaches councillor has requested an investigation into preventative measures to curtail vandalism in the Pittwater area, despite data showing incidents across the region have remained stable.

Narrabeen Ward councillor Vincent De Luca will move a notice of motion at Council’s February meeting asking for a cost benefit analysis of installing CCTV and alarms on all Council-owned buildings.

He will also request Council officers look into hiring security guards to monitor graffiti ‘hotspots’ on Friday and Saturday nights.

His calls follow a series of questions he submitted to Council, which reveal it spent an estimated $865,000 in graffiti removal costs in the Narrabeen and Pittwater Ward areas between January 2016 – January 2021.

The figures also show Council spent over $126,000 in the 2018/19 financial year on vandalism repairs in the two wards.

Council says based on documented repair jobs and staff knowledge, North Narrabeen Reserve’s sports amenities and the public toilets at the Tramshed, Avalon Surf Life Saving Club and Kitchener Park are the most frequently vandalised sites.

“Northern Beaches Council has five wards, and just two of them are nearly a million dollars in damages and graffiti in five years,” Councillor De Luca says.

“The residents aren’t complaining about nothing. It costs a fortune.

“Such measures will give police on the spot evidence and will also help them from having to go to crimes that can be prevented.”

A spokesperson for NSW Police told Peninsula Living all reports of malicious damage are investigated seriously and proactive taskings are conducted across the region in response to issues of graffiti and vandalism.

She pointed to NSW Crime Statistics data, which shows the number of reported graffiti incidents across the Beaches has remained stable over the five-year period, dropping from 265 in 2018/19 to 170 in 2019/20.

Northern Beaches Mayor Michal Regan says Council should continue to focus on operating the ‘several’ youth-focused programs and facilities in the north of the Peninsula that attract a ‘high level of engagement’.

“That’s our role, to provide opportunities so they can’t say, ‘There’s nothing to do or there’s nowhere to go’,” Mayor Regan says.

‘Very close to residents’ hearts’
Pittwater councillors call for Mona Vale acute services...
The crime report: Northern Beaches
Get the lowdown on the recent incidents reported near you...
Beaches Link put on ice?
State reviews major infrastructure projects...
Another tower for North Sydney
A development application (DA) has recently been submitted to North Sydney Council for...
Celebrating 100 years of Avalon Beach
Peninsula Living is exploring some of Avalon Beach’s incredible history in celebration of...