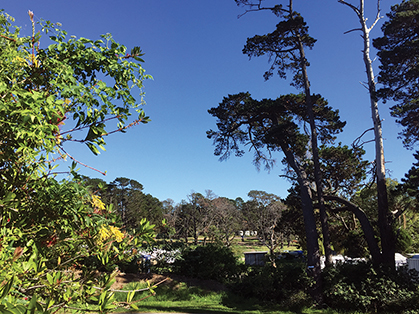 A semi-rural property in Ingleside.

Northern Beaches Council has welcomed clarification from the State Government that Sydney councils will be exempt from new land-clearing legislation.

In December, the State Government amended the boundary code within the Rural Fire Act to allow residents on rural-zoned land to clear as much as 25 metres of vegetation inside their property’s boundaries to mitigate bushfire risk.

While the terms of the code have not been finalised, the announcement sparked concern at Council over the impact on vegetation within rural zones.

As such, Councillor Natalie Warren brought a ‘matter of urgency’ to the meeting, calling for the local government area to either be exempted from changes or have specific conditions identified that apply to the Northern Beaches.

He says after the 10/50 vegetation clearing scheme was introduced in 2014, Council received numerous complaints from residents claiming neighbours were exploiting the clearing allowance.

“We don’t want to create the same situation again, which would significantly reduce mature tree numbers in those areas,” he says.

“Especially while we’re in the middle of trying to replant and grow our tree numbers and [curb] canopy loss.”

Council estimated the new laws may have applied to 1,106 lots across Terrey Hills, Duffys Forest, Ingleside, Elanora Heights, Bayview, Warriewood, and Mona Vale, and could have seen up to 384 hectares at risk of being cleared.

Councillor Vincent De Luca told Council residents in these rural areas continue to push for further action to reduce the risk of bushfire.

“Only last week I received correspondence from residents of Ingleside who are still very much concerned that works have not been properly undertaken to protect them from bushfire risk,” he said.

Local member for Pittwater and NSW Planning Minister Rob Stokes has since confirmed the updated code will apply mainly to rural regions, with metropolitan councils, such as Northern Beaches, able to ‘opt in’.

Stay vouchers available
A $50 accommodation voucher is now available for locals as part of the Stay NSW program...
New life for surf clubs
The redevelopments of the surf clubs at Mona Vale and Long Reef are almost finished...
Contest over country
Northern Beaches residents are urging local MPs to extend the period for public comment on...
‘Beyond breaking point’
North Shore nurses and midwives have been pushing for a better nurse-to-patient ratio and...
The crime report: North Shore
Get the lowdown on the recent incidents reported near you...