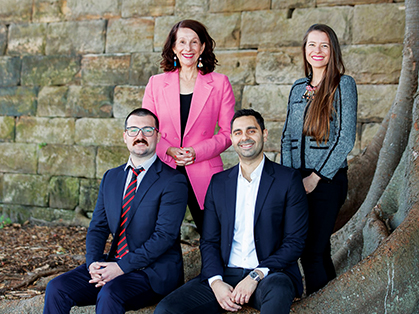 With dozens of candidates vying for a spot on the three local governments of Mosman, North Sydney and Willoughby, this year’s council elections are shaping up to be a tight battle.

The duo is campaigning on bringing experience and stability to the local community during the current uncertain times, with Mr Cook drawing on a long career in international business consulting and Ms Moline having spent 13 years on Council.

They will strive to preserve and protect the environment; and develop a parking plan that manages the long-term parking of boats and trailers, prioritising Mosman residents.

Long-time resident and financial advisor Sarah Harding will be leading the Voice of Mosman team, including Felix Nicholson and David Delprat.

The group of three represents a younger side of politics, with Sarah saying they are passionate about elevating the voice of demographics not currently included on Council at present.

“To date, there is no one representing the emerging generation of local residents and young families on Council,” she tells North Shore Living.

If elected to Council, the team will focus on supporting local businesses, improving parking and accessibility for persons with disability, and working with the State Government on clean energy initiatives.

Mayor Gibson will be drawing on her 22 years as a councillor and nine years as mayor.

The team will work towards delivering the pool by 2022; seeking a solution to the Harbour Bridge bike ramp; creating a public open space in Neutral Bay Village; and saving Cammeray Golf Course.

Known as one of Australia’s most successful businessmen, Mr Spenceley is hoping to inspire innovation at Council through the adoption of technology, such as a mobile app for community engagement.

He says while he will work to address issues such as the lack of free parking and heritage conservation, his greatest asset is having the business skills to ‘fix the infighting’ and facilitate good decision-making.

After working for Liberal, Labor and Greens MPs in the past, James Mullan will this time be throwing his own hat in the ring to run for Council.

The independent will be focusing on three key areas – better shared spaces, sustainability, and curbing what he calls Council’s culture of ‘infighting and ego games’.

If elected, he will focus on upgrading local sport and outdoor facilities, and improving the bike network, including redeveloping the Burton Street tunnel.

He also plans to create and promote sustainable initiatives, such as soft plastic recycling and food waste solutions.

This will be the first-time real estate agent John Tower will be running for local government, despite living and working in the North Sydney area for close to 30 years.

Mr Tower says he is inspired to join Council to help create a ‘harmonious, safe and healthy community’ through improving pedestrian safety, the cycling network and town centres.

If elected, he will advocate for increased pedestrian lighting and footpaths; propose a blueprint for a complete network of cycling paths and lanes locally; and encourage Council to establish a planning body focused on creating piazza-like community town centres across the area.

Ms Welch is an ICU nurse with 35 years’ experience, while Mr Santer is a local business owner.

Both are focused on working with small business to transform North Sydney into a 24/7 city; promoting sustainable development; increasing affordable housing; encouraging active transport; protecting Indigenous and settler history; and creating innovative outdoor spaces, such as a freeway rooftop park and a Waverton rail trail.

Councillor Ian Mutton is standing for re-election, intent on standing up to a State Government, he says, is ‘hell bent on carving up North Sydney’ with the planned infrastructure projects.

The current Wollstonecraft Ward councillor says he is still dedicated to bringing the heritage fleet to Berrys Bay and establishing the Sydney Harbour High Line between Waverton and Lavender Bay, but his focus is now more broadly on preserving the region’s open space and parklands.

When asked his focus heading into this election, Evan Predavec’s message was ‘simple’ – climate and community.

Mr Predavec is advocating for Council to show leadership on climate change through sustainable initiatives such as promoting electric car use, extending green space, linking the bicycle network and promoting sustainable building design.

He also wants to find new and effective ways to listen to the local community, particularly younger generations and small businesses who ‘may not feel Council is providing for them’.

He is hoping for a fourth term on Council, having represented the Tunks Ward since 2008 and fulfilling the position of deputy mayor three times.

Mayor of Willoughby, Gail Giles-Gidney, will be vying for the top job again after seven years in the post, backed by a team of experienced candidates, including current councillors Hugh Eriksson and Brendon Zhu.

If re-elected, she says the group will work towards implementing climate targets set out in Council’s Green City Plan; delivering a Local Environment Plan (LEP); addressing traffic challenges, including the Western Harbour Tunnel; and remaining transparent and accountable with the budget.

Long-time councillor Angelo Rozos will be putting himself forward for mayor come December 4.

The born and bred Willoughby local heads a group of candidates including his wife, Megan Rozos, and fellow resident Patrick Doran.

If on Council another term, Councillor Rozos says he will strive to tackle the issues of traffic and parking in Chatswood CBD; lower rates; fight over-development; and improve city-wide maintenance and safety programs.

He will also seek to introduce strategies to improve Chatswood nightlife and lobby for a university campus in the Chatswood CBD.

Well-known Willoughby local Tanya Taylor has put her hand up to run for Council in this year’s elections.

A resident for over 20 years, Tanya is a volunteer with the 1st Sailor Bay Sea Scouts and is the former co-president of the Willoughby Public School P&C Association.

Should she be elected, she will be focused on creating a sustainable and enjoyable environment for the region’s children, including better utilising open space and creating a social and supportive atmosphere.

As a candidate for the Willoughby elections, Artarmon’s Georgina Roussac is set on being a ‘strong voice’ for Naremburn, Artarmon, and their neighbouring communities.

The current president of Artarmon Progress Association will be joined by candidates Ashish Sethi and Glenda Hewitt to focus on local issues, such as a clear vision for future planning in the Naremburn Ward.

The group vows to represent the community’s views on the Western Harbour Link Tunnel to the State Government and work with the Northridge Progress Association to solve the issue of the carpark behind Northbridge Plaza in the proposed local centre strategy.

They will also aim to make the Have redevelopment in Castlecrag a reality, and promote environmental sustainability.

The candidates included in this feature are those registered with the NSW Electoral Commission as of 5 July 2021. Due to the emerging COVID-19 situation in Sydney, the NSW local government elections have been postponed to 4 December.

ONLY 5 LEFT
Garden Water Fountain, Save $395