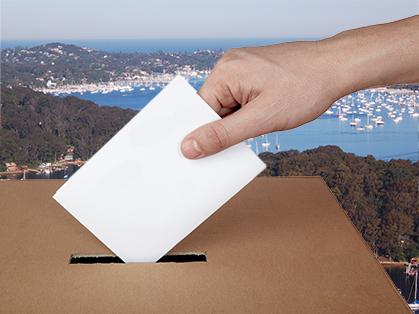 With several candidates vying to represent the Frenchs Forest, Curl Curl and Manly wards on the next Northern Beaches Council, this year’s local government elections are shaping up to be a tight battle.

Peninsula Living spoke with the candidates so far, from experienced incumbents to eager independents, to find out the platforms they’ll be campaigning on and their goals for office.

The Harvard Business School alumnus and fellow of the Australian Institute of Company Directors will turn a laser focus to Council’s finances, with plans to achieve efficiencies through its business areas and stop rates increases for at least two years.

He says he intends to deliver such efficiencies through technological enhancements; a reduction in consultants, contractors, and bureaucracy; and improving accountability on expenditure.

Should he be re-elected for the Curl Curl ward, Councillor Walton has revealed he will put his hand up for Mayor to ‘return’ focus to ‘roads, rates, and rubbish’ and find means of protecting the natural environment in financially sustainable ways.

Raised in the Forest, Councillor Sprott says he is passionate about preserving the open space he grew up with for future generations, despite the significant development planned for the area.

If he returns to Council, he says he will strive to keep rates low and reduce wasteful expenditure while improving services such as maintenance to parks, beaches, and town centres.

He will also champion sustainable development and infrastructure that prioritises the local environment and adopts new technologies, such as electric vehicle charging stations.

Finally, he vows to work with small and large businesses in the region to help build a thriving economy and find opportunities to create new jobs and services.

Ms Ryburn says she was inspired to run for Council by her educator father and charity worker mother who instilled in her a ‘strong sense of community’.

If elected, she is committed to fighting Council waste and freezing rates to reduce the ‘burden’ of increases.

She has also promised to support local businesses bouncing back from the pandemic, including ‘turbocharging’ the Corso to become a modern retail and hospitality CBD by cutting rates, expanding business zoning, and revitalising outdoor dining.

Her other plans include rejuvenating Manly’s art scene with a state-of-the-art theatre; upgrading South Steyne Surf Club; promoting community and sporting events to generate tourism; and preserving the local environment, including protecting Manly Dam from development.

Planning and environmental lawyer, Kristyn Glanville, will stand as the lead Greens candidate for a group contesting the Curl Curl ward.

The Freshwater local hopes to use her experience and knowledge in planning to assist Council in the preparation of its new Local Environmental Plan (LEP), ensuring future development delivers ‘good outcomes for the community’.

She is passionate about protecting the local environment and is eager to work with Council to support sustainable practices by small businesses and promote the community to reduce waste and live sustainably.

Meanwhile, long-time librarian Chris Burns will be throwing his hat in the ring for the Frenchs Forest ward, leading a team of Greens candidates.

The Forestville local has extensive experience in Council and State Government libraries, institutions which he believes illustrate the role of government in community building and providing services.

Following the recent announcement of the Frenchs Forest place strategy, he vows to advocate for more effective public transport links and active transport corridors to other parts of the Northern Beaches for the area.

He also promises to focus on creative solutions to the traffic and congestion issues such development has and will continue to create, as well as push for more affordable housing.

Finally, medical photographer and videographer Pamela Dawes has put her hand up to run with a group of Greens candidates in the Manly ward.

The dedicated volunteer has been a local scout leader, netball manager and coach as well as a passionate bush regeneration worker for many years.

If elected, she hopes to better preserve the local sea-life through implementing gross pollutant traps and would push for good bushland outcomes for infrastructure projects, such as the Wakehurst Parkway Flood Mitigation.

Current deputy mayor Candy Bingham is heading up a team for the Good for Manly independents this election.

With eight years’ experience in local government, she hopes to draw upon the ‘successes’ of her recent campaigns, including ‘Saving the Manly Ferry’; keeping the Office BYO; and upgrading local parks and sports fields.

Through focusing on strategic partnerships and community engagements, Councillor Bingham says she will strive to champion innovative environmental initiatives and revitalisation projects.

Long-time local mayor Michael Regan will once again be up for election, hoping to solidify his more than 20 years’ experience in the local government sector.

He will lead a team of three in the Frenchs Forest ward that includes fellow councillor and former deputy mayor, Roslyn Harrison.

Mayor Regan says he was inspired to run again, in part, by how Council was able to respond to the needs of the community and local businesses during the COVID-19 pandemic.

A mayor since 2008, he says he hopes to lead the community through its transition post-COVID-19 and in its long-term recovery.

If elected once more, he will aim to set up a taskforce on local housing unaffordability; prioritise women’s sport through investment in adapting facilities; and continue to work with the State Government on environmental initiatives and mitigating climate change.

Meanwhile in the Manly ward, current councillor Sarah Grattan will again step up to the plate this election, leading a group of three candidates.

The Balgowlah Heights local says she hopes to be reinstated on Council to continue campaigning for the community on several traffic and transport issues.

This includes pushing for improvements to the design of the Beaches Link Tunnel to minimise negative impacts on locals; partially reversing the State Government’s bus timetable changes; and pressuring the government to save the Manly ferry.

She plans to work with local businesses and community groups to revitalise the local economies of Manly and other villages, particularly post-COVID-19.

The environment will also be her focus, including advocating for the protection of the harbour, coastal and bush environments from ‘inappropriate’ development and the impacts of climate change.

The former deputy mayor says she has ‘unfinished business’ on Council, including encouraging further action to protect Curl Curl and Dee Why lagoons.

She says she will strive to increase local affordable housing and protect the community from incongruous development through facilitating ‘smart’ future planning.

The previous president of the Warringah Chamber of Commerce, Councillor Heins is also intent on providing assistance to small business to help them recover and thrive post-pandemic.

The candidates included in this article were registered with the NSW Electoral Commission, or approached Peninsula Living, as of 12 July 2021. Due to the evolving COVID-19 situation, the NSW local government elections have been postponed to Saturday 4 December.