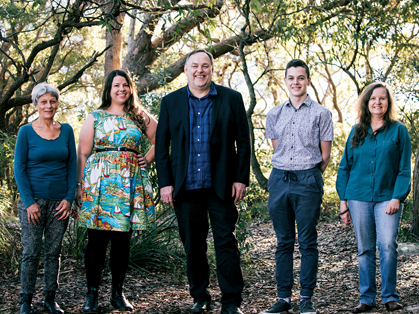 With several candidates vying to represent the Pittwater and Narrabeen Wards on the next Northern Beaches Council, this year’s local government elections are shaping up to be a tight battle.

Current Pittwater councillor Rory Amon will lead a team of Liberal candidates in the December elections.

The born and bred Northern Beaches local will be drawing on his experience garnered over the last term of Council, including campaigning for greater access to public space for dog owners and setting up his own small grants scheme.

Should he be re-elected, Councillor Amon says he will push to finalise community-driven place plans for Avalon Beach, Newport, and Mona Vale; fight against overdevelopment ‘threatened’ in Council’s housing strategy; and work to stop waste charge and rate rises.

He is also passionate about ‘cutting red tape’ for residents and small businesses.

Just before print, it was also announced that Bianca Crvelin, a former staffer for Federal Mackellar MP Jason Falinski, will contest Narrabeen Ward for the Liberals.

Well-known journalist and community advocate, Miranda Korzy, will stand as the lead Greens candidate for a group contesting the Pittwater Ward.

The Avalon local has been involved with several community and environmental groups over the past 15 years, including P&Cs, Save Mona Vale Hospital, and the Clareville and Bilgola Plateau Residents Association.

She is currently a member of Council’s Places for People Strategic Reference Group, and recently established Canopy Keepers – a group that aims to preserve urban forest.

If elected, she vows to fight to protect Pittwater’s villages from overdevelopment; minimise plastic pollution; and plan for the impacts of rising sea levels.

Meanwhile, young gun Ethan Hrnjack will be throwing his hat in the ring for the Narrabeen Ward, leading a team of Greens candidates.

If elected, the Year 12 student would be the youngest ever councillor in NSW and he hopes to bring the voice of youth to the Council floor.

“Whether it be climate change, high rates of anxiety and depression, lack of affordable housing, or degradation of our local environment, the Council plays a pivotal role in alleviating these burdens on our young people – which is why we need to have our voices heard,” he says.

As part of the generation that has grown up in the shadow of the climate crisis, he is fiercely passionate about the environment, previously protesting offshore gas drilling and joining the student strikes for climate.

Labor will once again contest the local government elections, with a team of candidates campaigning in the Narrabeen Ward.

Local Paula Goodman will lead the group, with her focus on habitat and wildlife conservation in the Pittwater area.

The WIRES volunteer rescuer says she hopes to represent the interests of the community to property investors and big business to ensure the preservation of the local environment.

As an advocate for the intended Women’s Resilience Centre, a recovery program for women who have experience domestic violence, she says she is also in touch with the concerns and needs of a large cross-section of the community.

The former television producer is joined in her campaign by previous Labor candidate for Pittwater in the state election, Jared Turkington, and journalist, Galileo West.

A familiar face around Pittwater, Michael Gencher says he has been motivated to run for Council by the importance of community.

The current vice-president of Mona Vale Surf Life Saving Club says he wants a Council that provides better infrastructure and maintenance, together with more affordable housing, while overseeing responsible development and planning.

Mr Gencher says he will focus on the interests of the community, including improving safety, crime prevention, traffic congestion and environmental sustainability as well as addressing issues impacting at-risk youth.

As a business owner in Pittwater, he is also passionate about promoting the interests of small business to Council.

Over in the Narrabeen Ward, Warriewood local Ruth Robins has put her hand up for election.

Drawing on her background in service roles for community organisations, she hopes to be a voice for Warriewood, Elanora Heights, Ingleside, and North Narrabeen residents on the decisions that impact them.

She has volunteered for several local charities, committees and boards in the past and is currently a member of the Warriewood Residents Association and the Residents Against Inappropriate Development – Ingleside (RAID).

If elected to Council, she says she will push for a plan to complete the development of Warriewood Valley and advocate for the State Government to address the community’s concerns about the Ingleside Precinct Plan.

She also plans to work towards solutions to the management of Narrabeen Lagoon, the widening of Wakehurst Parkway and the lack of local affordable housing.

Life-long Northern Beaches local Vincent De Luca has announced he will be standing for re-election this December.

The fierce independent says he wants to continue fighting for transparency and accountability in Council and against increases in rates, fees, and executive salaries.

If re-elected, Councillor De Luca says he will continue advocating against increased and inappropriate development, including Council’s housing strategy and the use of state government regulations to build boarding houses and seniors living.

With a background in youth suicide, drug and alcohol abuse, and domestic violence prevention, he remains passionate about supporting local charities as well as pushing for greater police presence north of Narrabeen bridge.

During the next term, he plans to push Council and the State Government to find a solution to the Wakehurst Parkway flooding; assist in developing a long-term management strategy for Narrabeen Lagoon; and promote the community’s concerns on the planned Ingleside precinct.

The candidates included in this article were registered with the NSW Electoral Commission, or approached Peninsula Living, as of 12 July 2021. Due to the evolving COVID-19 situation, the NSW local government elections have been postponed to Saturday 4 December.

Manly’s endangered locals
With threats stemming from fox and dog attacks, boat strikes, fishing lines, hooks,...
What happened to the HighLine?
In 2017, the community was promised ‘a high line to rival the great high lines of New...
New life for surf clubs
The redevelopments of the surf clubs at Mona Vale and Long Reef are almost finished...
Work to begin on Parkway fix
Council commits to detailed design of works...
Council converts to 100 per cent renewables
Willoughby City Council has opted for 100 per cent renewable energy under a new agreement...