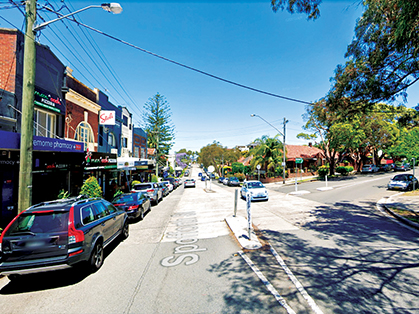 A Mosman councillor has accused North Sydney Council of ‘bullying’ over a proposal that would see traffic calming measures installed along Spofforth Street.

In March, North Sydney sought community consultation on proposed upgrades to three intersections along the road, which forms the border between the Mosman and North Sydney council areas.

This included letter dropping residents on both the North Sydney and Mosman sides of the road.

North Sydney says the improvements are in response to a history of crashes along the stretch, as well as concerns about pedestrian and traffic safety.

At the intersection with Rangers Road, the Council has proposed installing a roundabout or a signalised pedestrian crossing, or realigning the road with kerb buildouts.

This would result in the loss of at least 10 parking spaces near shops along Spofforth Street, with North Sydney flagging the removal or relocation of the existing bus stop on the Mosman side to offset the impact.

Mosman Council is concerned the loss of parking will negatively affect local shopkeepers, with car spaces to be moved to the opposite side of the road.

Mosman says it is also unable to share the cost of the works with North Sydney, which it forecasts will be ‘significant’.

At Mosman’s April meeting, Councillor Roy Bendall said he was ‘astounded’ North Sydney had moved ahead with public consultation, despite his Council and its traffic committee indicating it would not support the proposal.

“North Sydney is actually bullying us to get greater access [for] their community into our community at our expense,” he said.

Both Councils will need to agree on the upgrades before works can move forward.

To view the proposal, including improvement options for the intersection with Holt Avenue and Florence Street, visit the Your Say North Sydney Council website.

Manly’s endangered locals
With threats stemming from fox and dog attacks, boat strikes, fishing lines, hooks,...
What happened to the HighLine?
In 2017, the community was promised ‘a high line to rival the great high lines of New...
New life for surf clubs
The redevelopments of the surf clubs at Mona Vale and Long Reef are almost finished...
Work to begin on Parkway fix
Council commits to detailed design of works...
Council converts to 100 per cent renewables
Willoughby City Council has opted for 100 per cent renewable energy under a new agreement...