‘The community’s fired up’ 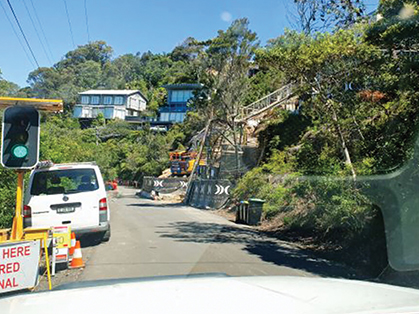 Picturesque Whale Beach Road has become a ‘battle ground of trucks, vehicles and building material’ according to local residents, as several significant developments occur on the street.

The Palm Beach and Whale Beach Association (PBWBA) says residents are being forced to endure years of construction noise, dust, loss of street parking and traffic chaos due to multiple building projects.

“The northern end of Whale Beach Road is a battleground of trucks, vehicles and building material left on the roadway and public verges,” the association said in its monthly newsletter.

“We feel for the residents with their loss of amenity… [It] is making living conditions extremely difficult.”

According to the Sydney Morning Herald, there have been 16 development applications approved for the road in the past two years and 36 notices of commencement, which herald the start of construction, in the past five years.

In January, residents endured single lane restrictions along the road with an automated light system as major construction continued.

Pittwater councillor Michael Gencher says the loss of amenity has become a ‘major issue’ for the area and ‘the community’s fired up’.

“It’s no longer just about the bulk or size of some of these monstrosities. It’s now carried over into trucks damaging roads, people not being able to access their driveways, stoppages to traffic flow, and people being inconvenienced by noise, dust and cranes in their line of sight,” he said.

Mr Gencher says while Northern Beaches Council can order construction works to be sped up and penalise those that fail to do so, the fine is little incentive for well-funded developers.

He says the current perception among the community is that local planning panels are increasingly becoming ‘stop gaps’ for developers to then seek approval of large-scale developments in the Land and Environment Court (L&E).

As such, Mr Gencher is calling on Council to lobby the State Government to address the issues alongside working towards the creation of a single Local Environment Plan (LEP).

“I struggle to see how that is going to be possible without these sub-character statements or definitions that allow each village, precinct or ward differences… There was promise pre-amalgamation,” he says.

Mona Vale hospital network boost
A new group of medical interns are set to commence their clinical training at Mona Vale...
New life for surf clubs
The redevelopments of the surf clubs at Mona Vale and Long Reef are almost finished...
‘It’s just too high’
North Sydney rejects Crows Nest skyscraper...
The crime report: Northern Beaches
Get the lowdown on the recent incidents reported near you...
Contest over country
Northern Beaches residents are urging local MPs to extend the period for public comment on...

5 x Acupuncture Treatments Only $60 Each

FREE Fitness for Over 50's!