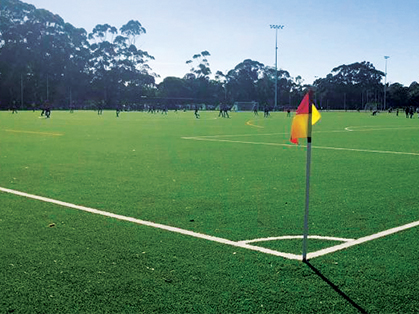 Northern Beaches Council has rejected calls to halt its rollout of synthetic playing fields until after the findings of a State Government investigation into their environmental and health impacts are revealed.

Councillor Stuart Sprott brought a motion forward at Council’s March meeting urging the future instalment of new synthetic sports fields on the Peninsula be paused until after the Department of Planning, Industry and the Environment (DPIE) releases its report.

Mr Stokes announced his department would be launching an investigation into sustainable alternatives to synthetic grass recently, in response to claims the rubber and microplastic can leach into waterways.

There are also concerns the material may pose a cancer risk and may result in extreme temperatures on or near the fields on hot days.

Studies of local waterways by the Australian Microplastic Assessment Project (AUSMAP) together with Council found 80 per cent of the waste entering stormwater drains was black crumb.

This is in comparison to just 5 per cent in areas without synthetic fields.

Alongside this, a study by Western Sydney University found temperatures on a synthetic play area in western Sydney skyrocketed to 106 degrees during a heatwave in January 2020.

Councillors discussed the motion at length, with most concerned halting the rollout would see delays to new sporting fields being built in the area, which is already an estimated 21 fields short.

Many highlighted Council’s current retro-fit program, which has seen mitigation measures such as stormwater filters, cuffs and retaining walls installed, and increased footpath vacuuming and sweeping around synthetic fields at Frenchs Forest’s Lionel Watts and in Cromer.

“We know there are issues with rubber coming off, we know that we will have to manage that in a better way than we have been, and we’ve been proactive about that,” said Pittwater Councillor Ian White.

“Our synthetic fields have been a real godsend for our local sports teams, and I really don’t think a Minister calling for a report is a reason for us to rethink what we’re doing.”

While no fields are on Council’s works schedule until at least 2024, the decision to progress with the rollout has ramifications for Avalon, with a field earmarked for Careel Bay.

Council has affirmed that any findings or technological improvements from the State Government’s review will be ‘considered closely’.

Manly’s endangered locals
With threats stemming from fox and dog attacks, boat strikes, fishing lines, hooks,...
What happened to the HighLine?
In 2017, the community was promised ‘a high line to rival the great high lines of New...
The crime report: Pittwater
Get the lowdown on the recent incidents reported near you...
Youth Awards announced
Mosman Council recently announced entries for two awards recognising the area’s young...
‘It was a case of people power’
Cremorne homes receive heritage protection...