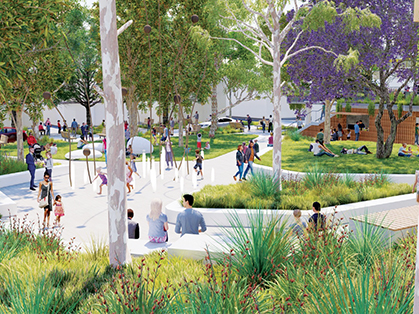 Holtermann Street carpark in Crows Nest is planned to be transformed into a playground bursting with vegetation.

North Sydney Council has released the plans in a bid to bring the town centre to life by creating more public spaces.

The new park would be created by relocating the current 207 car parking spaces to an underground basement format, allowing the surface to be utilised as public space.

The plans for the former carpark include green spaces, a water play area, a new inclusive playground, dining areas for people to sit, and upgraded public amenities within the Crows Nest Centre.

There are currently three proposed designs as to how to transform the space all on public exhibition.

If the proposal is approved, works are expected to commence in winter 2023 and the park is estimated to open at the start of summer 2023.

The crime report: North Shore
Get the lowdown on the recent incidents reported near you...
Another tower for North Sydney
A development application (DA) has recently been submitted to North Sydney Council for...
Contest over country
Northern Beaches residents are urging local MPs to extend the period for public comment on...
‘Beyond breaking point’
North Shore nurses and midwives have been pushing for a better nurse-to-patient ratio and...
Youth Awards announced
Mosman Council recently announced entries for two awards recognising the area’s young...