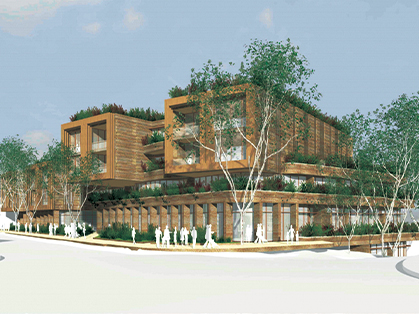 A concept design of the proposed redevelopment of the Quadrangle shopping centre, Castlecrag.

Willoughby City councillors and the Castlecrag community remain divided over a $70 million redevelopment plan for the Quadrangle shopping centre.

A proposal, submitted to Council in December, would see the centre transformed to include a supermarket, cafés, retail and 67 shop-top apartments across three to four storeys facing Edinburgh Road.

The plans were met with extensive debate by councillors over claims the community, along with the Castlecrag Progress Association, had not been given adequate time to consider the proposal ahead of Council’s meeting.

Residents also raised concerns over the proposed 18.5 – 22.5 metre height limit and the impact the redevelopment may have on overshadowing, traffic, the heritage value, and the environment of the town centre.

“It’s grossly excessive in its height, bulk and scale. It will tower over the streetscape in total contradiction of [Walter Burley] Griffin’s philosophy of development subordinate to the landscape,” Castlecrag resident Suzie Gold told the meeting.

Sailors Bay Ward Councillor Hugh Eriksson says he has heard mixed feedback on the development from the community.

He called for the plans to be endorsed at the meeting, considering applicant Greencliff has already lodged a gateway review of the proposal with the Department of Planning.

“I strongly believe that after much community consultation on this matter that there is now a very strong sense of support for a redevelopment of the Quadrangle site,” Councillor Eriksson told Council.

“I do believe the applicant has spent a great deal of time trying to work with the community through a design competition and numerous community meetings to come to a design that is sympathetic to the site.”

Despite Council officers recommending the proposal not be supported due to it contradicting the area’s local centres strategy, Council instead voted to defer the matter.

The proposal will now be brought to the February council meeting, extending time for locals to consider the plans.

Mona Vale, have your say!
As part of the development of the Mona Vale Place Plan, Northern Beaches Council is urging...
Clifton Gardens clean up
Fifty volunteers recently teamed up to conduct a clean-up of Clifton Gardens and Chowder...
MP weighs in on Avalon land closure
Member for Pittwater Rob Stokes has urged Northern Beaches Council not to proceed with the...
Manly’s endangered locals
With threats stemming from fox and dog attacks, boat strikes, fishing lines, hooks,...
What happened to the HighLine?
In 2017, the community was promised ‘a high line to rival the great high lines of New...